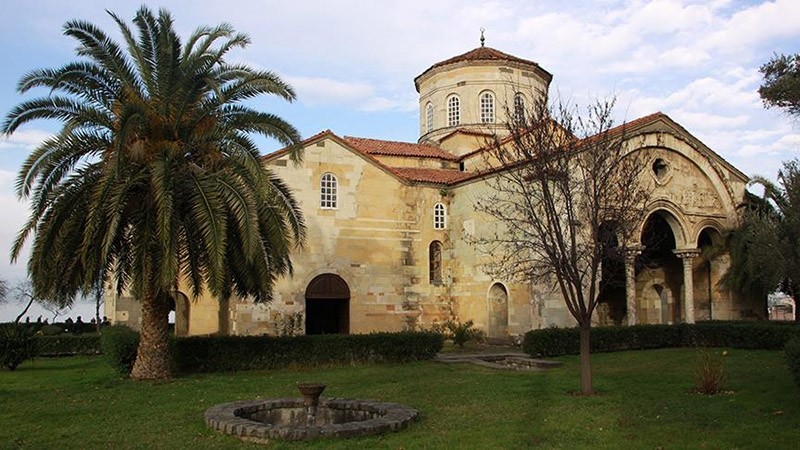 The Hagia Sofia Mosque, located in Turkey's northeastern province of Trabzon, will undergo a new restoration project worth about 2 million Turkish liras.

The medieval church of Hagia Sofia (also referred to as Saint Sophia or Ayasofya) was built between 1238 and 1263, and later converted into a mosque in 1461 during the Ottoman period.

The Hagia Sofia Mosque, which is regarded as one of the finest examples of Byzantine architecture, served a museum for 52 years before it was reopened to worship in 2013.

A mihrab, a minbar and carpets were added to the mosque without damaging the historical structure, while all the frescoes were covered with curtains to create room for prayers.

Trabzon's Regional Director of Foundations Ismet Çalık said that the Hagia Sophia Mosque was one of the most important touristic attractions of the Black Sea region.

The planned restoration project will be launched within this year and mainly focus on removing the screening system used to cover the building's frescoes.

Explaining the new project, Çalık said that the southern part of the building, where no frescoes are pictured, will be opened to worship all the time, whereas the dome and the walls with frescoes in the northern part will be covered with a special transparent screening system. This new system will cover the paintings with an electrical film activated only by a button whenever needed during prayers, turning the transparent glass opaque.

The restoration is planned to last for two years and will also include environmental planning of the site, preserving the nature while a walking path will be built with natural stones.

The former Hagia Sophia church is an important example of late Byzantine architecture, characterized by a high central dome and four large column arches supporting the weight of the dome and the ceiling. The current mosque attracts hundreds of tourists visiting Trabzon.