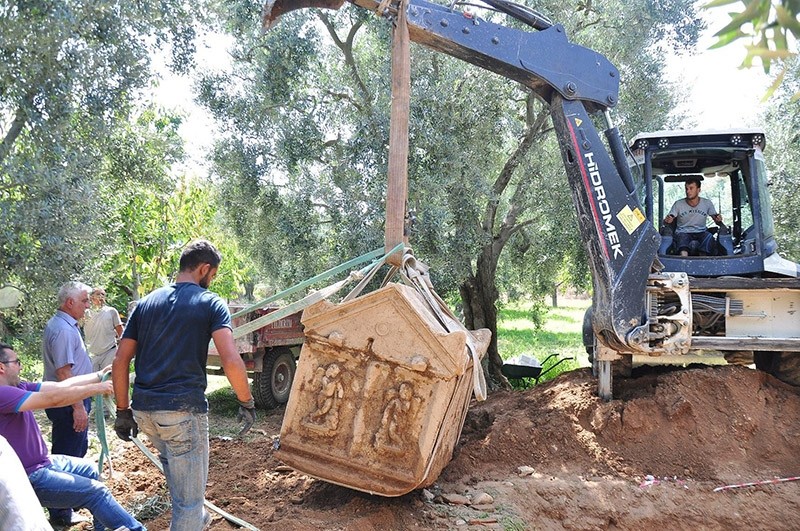 This file photo from September 2016 shows archaeological teams carrying out work after the discovery of a tomb in Bursa province (DHA Photo)
by Daily Sabah Feb 13, 2017 12:00 am

Three more ancient burial chambers from the Late Antiquity period have been discovered in an olive grove in Turkey's western Bursa province. The chambers have been put under protection until archaeological teams arrive at the scene, reports said on Sunday.

The sarcophagi were reportedly found in an olive grove belonging to Hatice Süren near the Hisardere district, 5 kilometers (3 miles) away from İznik's (Nicea) town center.

Experts are predicting that the area could be a necropolis — a large and ancient cemetery with elaborate burial chambers.

The Ministry of Culture and Tourism has been carrying out expropriation work after the discovery of ancient sarcophagi from the third century A.D.

The grove had previously been raided by treasure hunters, who found one tomb and damaged its cover when they tried to unearth it, possibly in search of gold and other valuables they thought would be inside.

The new sarcophagi reportedly feature covers with unique reliefs of Eros covered in lotus flowers and figures with lion's heads. One of them was reported to weigh 7 tons.

Officials from İznik Museum Directorate have reportedly covered the sarcophagi, while gendarmerie teams are on guard 24 hours a day to ensure the security of the ancient tombs until an expert team of archaeologists arrive from Ankara to start the excavation.

In September, police teams searching the area for a stolen truck discovered a sarcophagus from the Late Antiquity period in the same olive grove.

The sarcophagi reportedly weigh between 4 to 6 tons and are estimated to be between 1,800 to 2,000 years old.