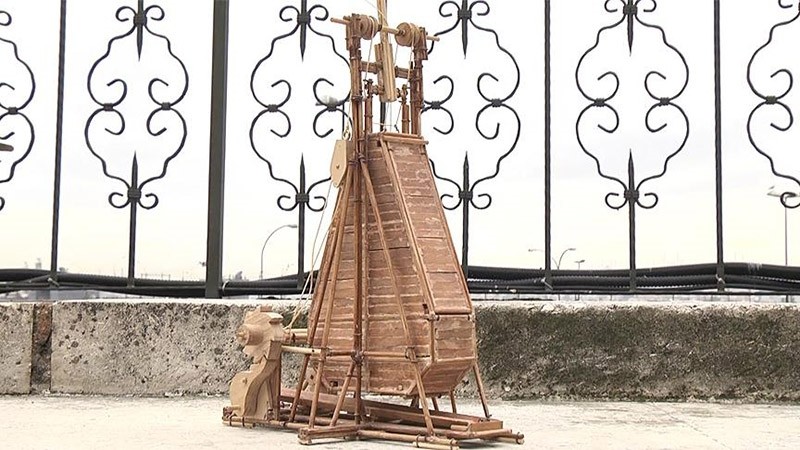 Historian Sefa Özkaya and mechanical artist Yücel Aşıkoğlu have made a miniature version of the catapult used during the conquest of Istanbul, with the support of the Foundation for the Protection of the Environment Tourism Values of Turkey.

Catapults were used centuries ago as a leverage mechanism to sling heavy stones at fortresses during a siege. This kind of primitive weapon was used during the conquest of Istanbul in 1453 and during the Ottoman wars of the Middle Ages.

Özkay and Aşıkoğlu have brought the weapon back to life by designing and constructing a historically accurate miniature.

Starting in the 15th century, the catapult was used to throw stones or flammable substances at the enemy, Özkay told Anadolu Agency.

"The catapult is very important in military history studies and we wanted to remake it to explain the weapon to modern citizens in Turkey," he said.

Özkaya explained that the catapults were used extensively during the conquest of Istanbul but that the weapons have not been constructed in Turkey for 550 years. "This was the first time that a catapult has been built in Turkey in five and half centuries."

But there have been more recent uses for the contraption elsewhere. Özkaya explained how catapult-like weapon tools were employed by American aircraft crews in the 21st century, who used the devices to launch an aircraft more quickly.