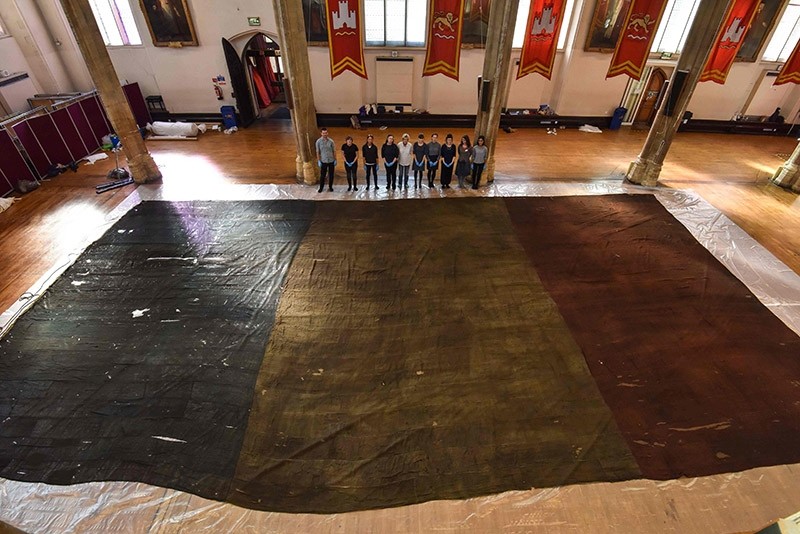 A French flag the size of a tennis court, captured by the British in 1800, will be unfurled at a British castle this year in its first public showing in more than a century.

The ensign, captured from the French warship Le Genereux on February 18, 1800, was gifted to the city of Norwich in eastern England.

Measuring 16 meters (52.5 feet) by 8.3 meters (27.2 feet), the flag will be the centerpiece of an exhibition at Norwich Castle exploring the relationship between Britain's Admiral Horatio Nelson and his home county of Norfolk.

The blue, white and red colors -- in that order from left to right -- were officially adopted in 1794.

The flag will be on view at the castle from July 29 to October 1.

Le Genereux was one of only two ships of the French fleet to escape the Battle of the Nile in 1798, the victory which sealed Nelson's reputation.

The ship was captured in 1800 and the ensign sent to Norwich, where it was put on display until 1897, before being placed in the Norwich Castle keep for the 1905 centenary of the Battle of Trafalgar.

The Norfolk Museums Service and the Costume and Textile Association are attempting to raise £40,000 ($50,000, 47,000 euros) towards its conservation and putting it on permanent display.

"The ensign is remarkable for its survival in such a complete state, given its age and inherent fragility," said Ruth Battersby-Tooke, curator of costume and textiles at Norwich Castle.

It is "the oldest French ensign in the UK and the one with the most stirring and thrilling history", she added.

Initial conservation efforts have discovered a nail hammered through the rope which would have been used to nail the colors to the mast.

Fragments of wood, likely to be splinters from battle-damaged ships, and traces of gunpowder have also been found.