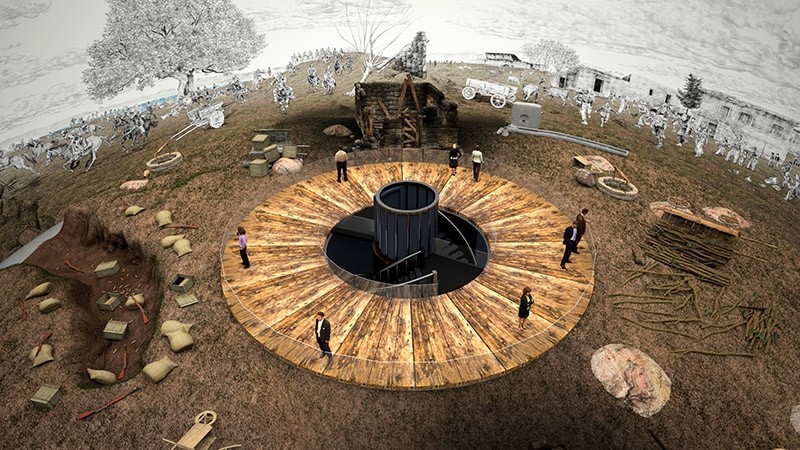 The new Sarıkamış Panorama Museum built in a National Park in northeastern Turkey's Allahuekber Mountains will take visitors on a journey through time and enable them to experience the World War I battle of Sarıkamış with virtual reality.

The museum will open to public this year and will offer its visitors a panoramic glimpse into world 100 years ago.

A technology company illustrated information compiled from Turkish and Russian military and historical documents, and then turned that information into virtual reality.

The museum's huge visual content is currently takes up a space of 2,680 square meters.

Museum patrons will first read information about Caucasian history from 1015-1914, and then learn about the history of Turkish people in that region.

Then, visitors will gather in a cold room with a fixed temperature of -20 degrees Celsius..

The room mirrors the exact temperature during the start of the battle of Sarıkamış on Dec. 22 1914, and will allow visitors to empathize with the soldiers on a personal level.

The museum will also feature information on the 1915 massacre of 2,500 Muslims by Armenians in the village of Zeve in eastern Van on a 360-degree stage, enabling them to experience the tragedy with virtual reality glasses.

The Caucasian Front Research Center within the museum will be the biggest library in the region.

Thousands of Ottoman soldiers died tragically when a military maneuver trapped a 90,000-strong army branch in the freezing wintry cold in Sarıkamış during the battle between the Russian and Ottoman empires during World War I.

The Ottomans, who wanted to recapture the eastern city of Kars from the Russians, initiated the conflict that took place between Dec. 1914 and Jan. 1915. The Ottoman troops, however, were ill prepared for hard winter conditions and suffered major causalities in the Allahuekber Mountains, eventually losing the battle to Russians.