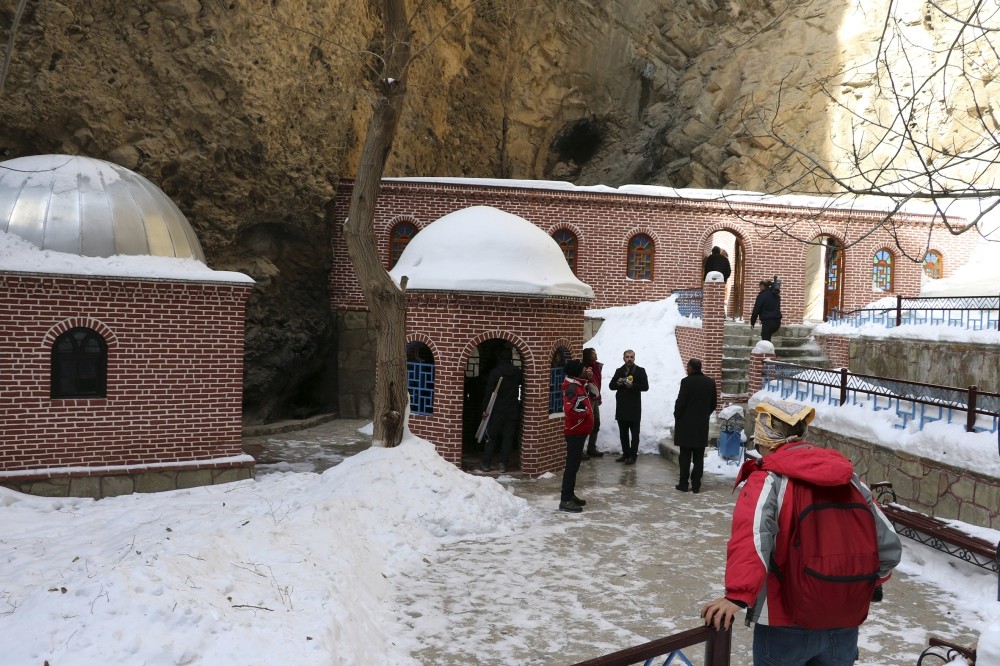 Located in Julfa, the Seven Sleepersu2019 Cave, which bears traces of multiple ancient cultures, attracts widespread attention from tourists, especially those from Muslim countries, including Iran and Turkey.
by Anadolu Agency Mar 10, 2017 12:00 am
In the Nakhchivan Autonomous Republic of Azerbaijan, the Seven Sleepers (Ashab al-Kahf) Religious and Social Complex hosts hundreds of tourists from countries across the world all year-round.

Located in Julfa, the Seven Sleepers' Cave, which bears traces of multiple ancient cultures, attracts widespread attention from tourists, especially those from Muslim countries, including Iran and Turkey.

A one-hour drive from the city center, the Seven Sleepers' Cave is the most important touristic attraction in religious tourism in Nakhchivan. The manager of the Seven Sleepers' Religious and Social Complex Qurbanov Qaraj Sevdimalıoğlu says that the caves are an important aspect of religious tourism and one of the most sacred touristic attractions in the region.

"We have visitors from all over the world; from our sister country Turkey, and Iran, the U.S., France, the U.K., Japan, Malaysia and Arab countries. Even business professionals travelling to the capital city of Baku for international conferences and meetings, for example, will make time to visit the Seven Sleepers' Cave as well. Our distinguished leader, Haydar Aliyev, has established a governmental enterprise here and the site has been registered as a religious-social complex," Sevdimalıoğlu said.

Cengiz Erdener, who came to visit the Seven Sleepers' Cave from Turkey, said he enjoyed his visit, noting: "It is a very fascinating and interesting place. This experience is also spiritually enlightening as it has sacred and religious value. The story of the seven sleepers is actually included in the Quran and it has been an honor for me to visit a place with such historic religious roots. I truly enjoyed my visit," he added.

Hülya Arslan, another Turkish tourist, said she found the Seven Sleepers Cave to be very peaceful: "The local people and the natural beauty of this place made me feel at peace. I will go back to Turkey feeling quite satisfied with my trip. It is unbelievably beautiful. I feel very lucky to have visited this sacred place. Also, the way in which the Azeri and Nakhchivan people welcomed us has touched my heart. I extend my respect to these people," Arslan said.
Last Update: Mar 10, 2017 1:21 am
RELATED TOPICS