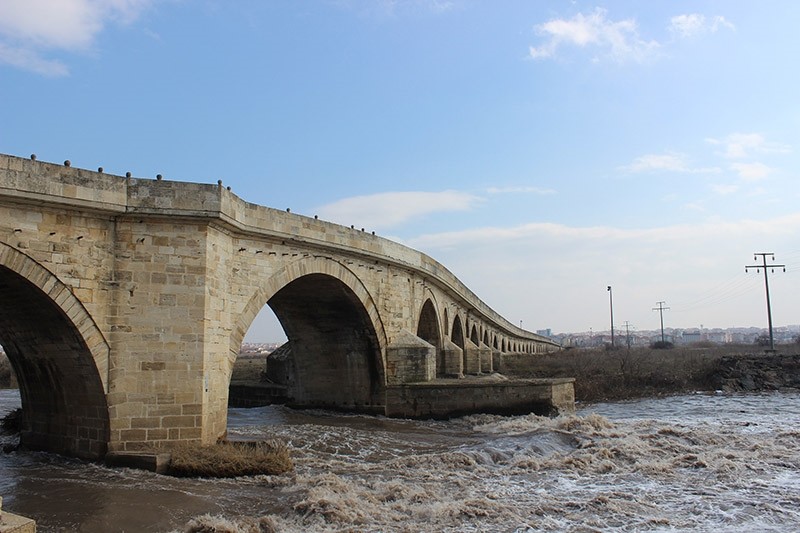 The Uzunköprü Bridge, which crosses over the Ergene River in in western Turkey, is expected to be included on UNESCO's Tangible Cultural Heritage List, as the Edirne Municipality has submitted all the necessary documents to the Ministry of Culture and Tourism.

Known as the world's longest stone bridge at 1,392 meters, the Uzunköprü Bridge has been part of UNESCO's Temporary Tangible Cultural Heritage List since 2015.

Edirne Mayor Enis Işbilen said that the ongoing restoration of the bridge, which is being carried out in coordination with Trakya University, could take some time, adding that he was hopeful for the extensive project to be accepted.

The city of Edirne, which was the capital of the Ottoman Empire for 92 years, has a large number of historical buildings. The bridge follows in the footsteps of its fellow Edirne heritage list makers, the Selimiye Mosque and historical Kırkpınar Oil Wrestling.

The Uzunköprü Bridge extends over the Ergene River and it is the only stone bridge connecting Anatolia to the Balkans.

The bridge, previously named Ergene Bridge, was built between 1426 and 1443 by the Ottoman Empire head architect Muslihiddin upon the orders of Sultan Murad II.

The stone bridge is well over a kilometer long and up to 6.8-meters wide.

The Uzunköprü Bridge was constructed to enable passage across the natural river barrier by the Ottoman soldier during the Empire's military campaigns in the Balkans and allowed the army to continue its advance during winter months.