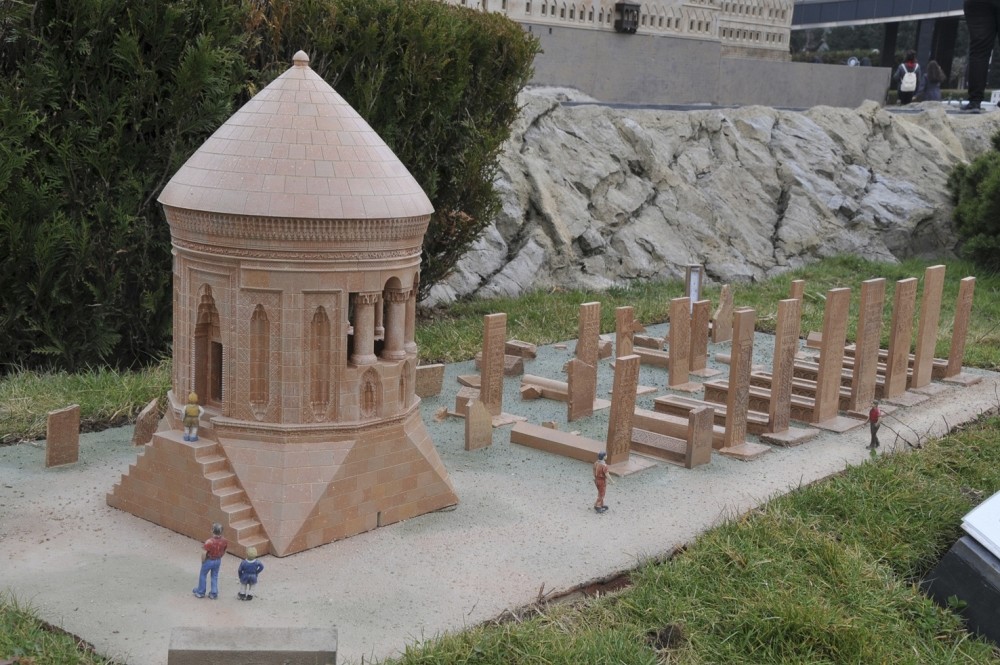 by Daily Sabah Mar 21, 2017 12:00 am
Two monuments located in Bitlis's Ahlat district, a city that has played a key role in the historic Turkish migration to Anatolia and is one of the three cities with the title of "Kubbetul-Islam" are now on display in Miniaturk.

Emir Bayindir Cupola and the Ahlat Seljuk Cemetery became the 132nd models at Miniaturk, which includes models scaled to one-25th of their original size, consisting of selected architectural monuments from Turkish and Ottoman lands.

Emir Bayindir Cupola is a monument from the Akkoyunlu period. Constructed by Şah Selime Hatun for her husband Emir Bayindir, the son of Rüstem Bey and the grandson of Uzun Hasan, the ruler of the Aq Qoyunlu Dynasty. It was made by a craftsman named "Babacan" from Ahlat. Cupola is distinguished from its counterparts with its vaulted and columned structure.

Ahlat Seljuk Cemetery contains approximately 8,000 tombstones including 435 made by artists and 178 cairn-type sepultures with various typologies from the 11th to the 16th centuries. The cemetery, which stretches across a 210,000- square-meter area, is known as the largest mausoleum in the Islamic world. The tombstones are decorated with Seljuk era ornamentation techniques with geometrical and floral decorations. There are also stunning examples of art of writing and the Ahlat tombstones are monuments known for their size and content.

Miniaturk, which brings together numerous cultural monuments from Hagia Sophia to Selimiye, from the Rumeli Fortress to the Galata Tower, from Safranbolu houses to the Sumela Monastery, from Kubbetu's Sahra to Nemrut Mountain relics, also revives models of the Temple of Artemis, Halicarnassus Mausoleum and Ecyad Castle, which no longer exists. Miniaturk has architectural monuments from all the civilizations that existed in and around Anatolia from antiquity to the Byzantine period and the Seljuk and Ottoman periods, including 3,000 years of cultural artifacts and models. Miniaturk is open for visitors along the Golden Horn.
RELATED TOPICS