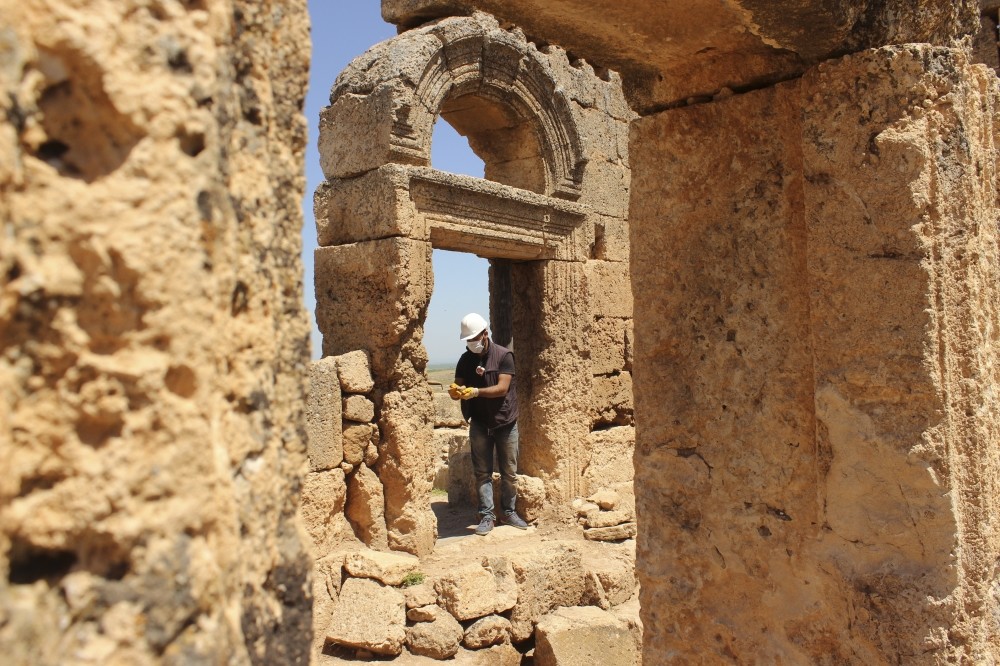 The vast space where the temple is located also includes a church building, administrative buildings, ruins of ancient homes, grain and weapon storage facilities, an underground temple, underground shelters, rock tombs and water channels.
by Anadolu Agency May 02, 2017 12:00 am

As part of the excavations conducted over the last four years at the Zerzevan Castle in Diyarbakır province, where an underground church, underground shelter and secret passages were discovered formerly, a 1,700-year-old underground temple, belonging to the Mithras religion, has recently been unearthed

During excavations at the Zerzevan Castle in Diyarbakır's Çınar district, a 1,700-year-old Roman-era underground temple belonging to the Mithras religion has been discovered.

The castle, which once served as military premises, is situated on a 55,200-square-meter area surrounded with walls stretching 12 to 15 meters high and 1,200 meters long, along with a 21-meter high watchtower and guard castle.

Previously, an underground church and an underground shelter with a capacity to hold 400 people, houses and hidden passages were unearthed. Now, a temple belonging to the Mithras religion, which was lost after the adoption of Christianity in the fourth century, has also been unearthed.

Çınar District Governor İsmail Şanlı, who visited the excavation site, spoke to an Anadolu Agency (AA) reporter and noted that the cities of Diyarbakır and Mardin are visible from the Zerzevan Castle.

According to Şanlı, the district's eastern side has been strengthened with natural defense lines and this area was conquered by armies aiming to reach Diyarbakır.

Regarding the castle's history which is nearly as old as the city of Diyarbakır itself, Şanlı stated that they have remained committed to the discovery of great historical artifacts, adding that each year as new artifacts are discovered the history of the region becomes more transparent.

"We are hosting many excavations that will add value to tourism and bolster the economy of the country in the long term," Şanlı said, adding that the castle is visited by many tourists especially on the weekends.

"We are seeing the effects of the ending of terror operations and see how locals are becoming more peaceful. As terror retreats, our success in defeating terrorism becomes stronger; we will have more chances to improve tourism. We will get rid of terror in our region and Turkey as a country. People will see growth in employment and find peace here while having more opportunities to travel in safety," Şanlı said.

The head of the excavations, assistant professor Aytaç Coşkun, a faculty member of the Department of Archaeology at Dicle University, noted that they believe the temple is the only Mithras temple on the eastern border of the Roman Empire and is, therefore, of crucial importance. He also added that the religion of Mithras was a religion of mystery widely popular among Roman soldiers.

"The followers of this religion are from a closed community because their religious ceremonies are completely secret and no information was leaked to outsiders. Mithras represents both the sun god and also "consensus." Their temples are usually built underground. There are three niches on the eastern part of the temple. A very thoroughly constructed one is in the water basin. There is also a pool. We believe water was very widely used in Mithras ceremonies and about 40 people attended ceremonies held here," Coşkun said.

With the arrival of Christianity, the religion of Mithras lost its importance and the recently discovered temple is from the peak times of this religion.

Coşkun noted that the temple is 35 square-meters wide and reaches a height of 2.5 meters. He added that because these such temple were built underground, the temples are usually not large structures.

"The excavations at the castle are important for shedding light on the ancient Roman area and will have a tremendous impact on the history and tourism in the region," Coşkun said.

He added that the ruins have been preserved without much damage and the castle is a city of its own both under and above the ground.

The manager of City Culture and Tourism Cemil Alp said they obtained an enormous amount of information on the history of the region and that he believes there will be a breakthrough in tourism with the exhibition of the artifacts found.

The first settlement was named "Samachi" and while it is not certain when it was built, the excavations are close to revealing its age. The castle walls were repaired at the time of Anastasios (491-518 A.D.) and Justinianos (527-565 A.D.) and some parts have been completely reconstructed.
RELATED TOPICS