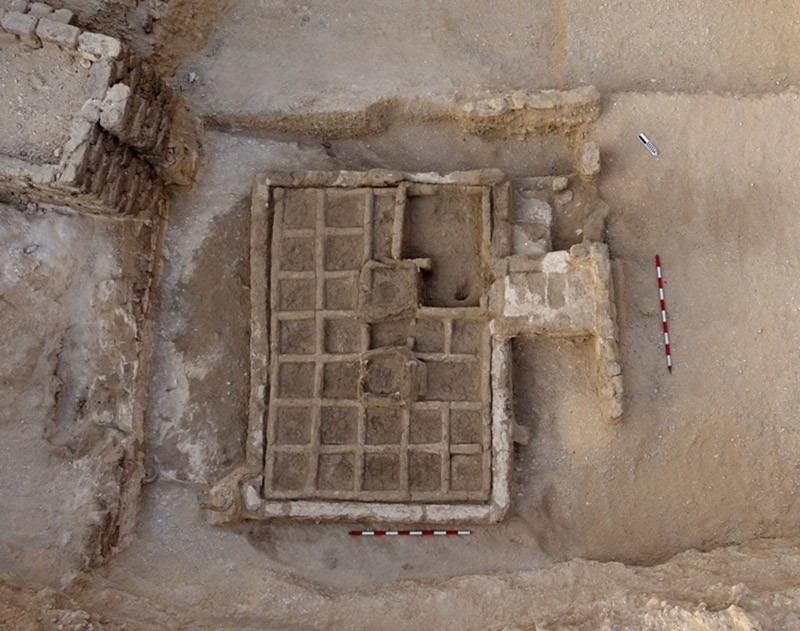 A handout picture released by the Egyptian Ministry of Antiquities on May 3, 2017, shows the remains of a nearly 4,000 year old model garden following its discovery at the Draa Abul Nagaa necropolis on the west bank of the Nile River (AFP Photo)
by May 03, 2017 12:00 am

Archaeologists have discovered the remains of a nearly 4,000 year old model garden outside a tomb in the ancient Egyptian capital of Thebes, the antiquities ministry said on Wednesday.

The find was made by a Spanish team in the Draa Abul Nagaa necropolis across the Nile from the modern-day city of Luxor, the ministry said.

The three metre by two metre (10 foot by seven foot) garden consists of equally divided square plots each about 30 centimetres (a foot) across.

The garden "probably had a symbolic meaning and must have played a role in the funerary rites," the ministry cited the head of the Spanish team, Jose Galan, as saying.

"The like has never been found in ancient Thebes."

The ministry's head of ancient Egyptian antiquities, Mahmoud Afifi, said the tiny square plots seem to have each contained different species of plants and flowers.

"In the middle there are two elevated spots for a small tree or bush," the ministry cited him as saying.

"At one of the corners, the root and the trunk of a 4,000 year old small tree have been preserved to a height of 30 centimetres (a foot).

"Next to it, a bowl was found containing dates and other fruits, which could have been presented as an offering."

In ancient Egypt, the dead were traditionally surrounded by objects they enjoyed in life, so they could continue to enjoy them in the afterlife.

The team also discovered a small mud-brick temple attached to the tomb containing three stone slabs, one of which contained a dedication to the Egyptian gods Montu, Ptah, Sokar and Osiris.

The Draa Abul Naga necropolis is located near the famed Valley of the Kings, where many of the pharaohs, including Tutankhamun, were buried.

It is where a separate team of archaeologists found several 3,500 year old mummies and more than 1,000 funerary statues in a discovery announced by the ministry last month.