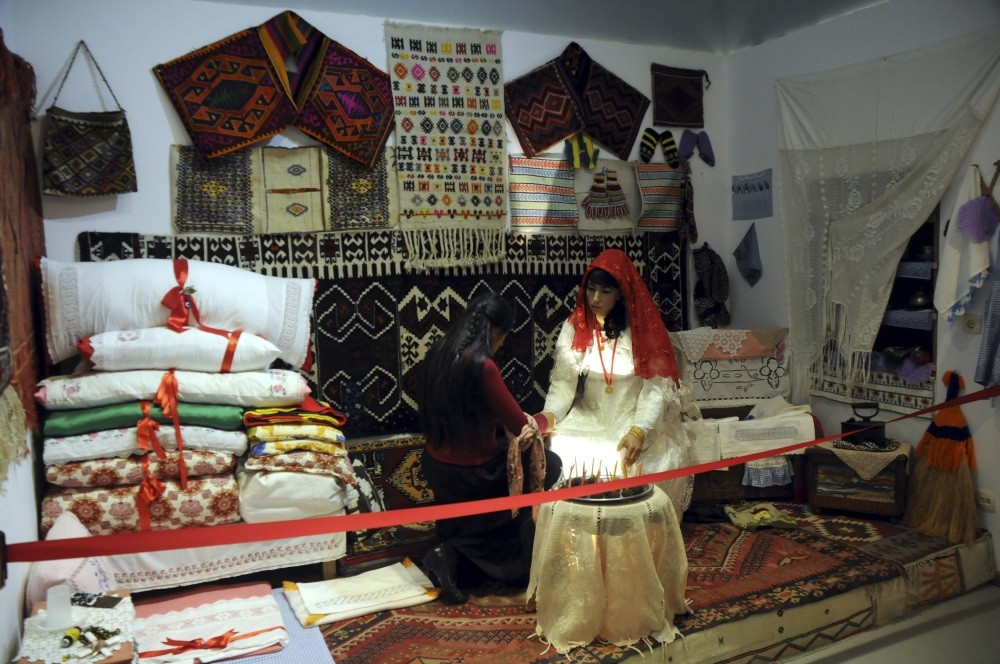 Cultural and folkloric traits and subjects reflecting the socioeconomic practices in the area are exhibited in the museum.
by Anadolu Agency May 04, 2017 12:00 am
Based in Osmaniye province, the Kadirli City Museum, which was closed seven years ago after serving as a prison for 40 years, was converted to a museum last year and has been visited by 50,000 visitors.

In the museum, where cultural and folkloric traits and subjects reflecting the socio-economic practices in the area are exhibited, visitors can also find wax sculptures, personal belongings and works by artists who were born and grew up in the Çukurova region.

Museum curator Cevahir Zararsız spoke to Anadolu Agency (AA) and stated that the ex-prison building was converted to a museum after a restoration process.

"These kinds of museums are the most precious sources to store the memory, identity, history and also the future of cities. The building, which was built as a prison in 1970, was opened to visitors last year after the restoration process carried out by Kadirli Municipality and Eastern Mediterranean Development Agency (DOĞAKA). The museum attracts a great deal of attention from local and foreign tourists," Zararsız said.

Stating that the museum is open to visitors six days a week, Zararsız added, "In our museum, the handicrafts that were defeated by technology and wax sculptures made by artisans that sunk into oblivion, like whitesmiths, saddle smiths, hammer smiths and blacksmiths, are on display. The building's being converted from a prison, on the other hand, is an extra source of attraction."

Expressing that their aim is to transfer the culture of the district to future generations, Zararsız noted, "Visitors can find some common points between the past and their current life through the wax sculptures and models. They go on a journey to the past. Our aim is to raise a generation that is equipped with information on the past and that tries to interpret today's world in the light of this information."

Adem Karabörk, one of the visitors to the city museum, stated that he had really enjoyed visiting the museum where elements of the recent past were displayed and said, "Everyone who is in the district must visit the museum."

Visitors Ali Mümtaz Sayman and Muammer Can Kaplan, a middle school student, also stated that they observed how harsh life was for many people coming from area down the generations.

Saying that he had a chance to compare the life of his forebears to his own life, Kaplan said, "I witnessed the difficulties and impossibilities of the past thanks to the museum and compared them to the innovations of today's world. Life is easier today thanks to greater opportunities. We have witnessed the harsh struggle for life of our ancestors and how difficult it was to get an education in the past."

Aleyna Bektaş, who is also a student, expressed that the fact the museum was converted from an ex-prison attracted her attention and she stated her visit was almost a journey in time from the moment she entered the museum.
Last Update: May 04, 2017 1:59 am
RELATED TOPICS