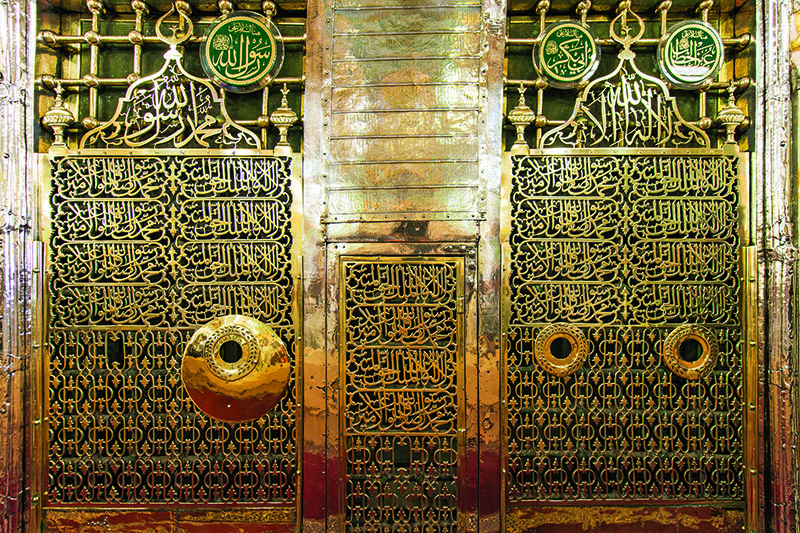 Subtle yet substantial traces of Ottoman Sultan Ahmed I live on at the Al-Masjid al-Nabawi (The Prophet's Mosque) in Medina, Saudi Arabia.

Remembered for his piety and for the impressive mosques that he commissioned, including the Blue Mosque in Istanbul, Sultan Ahmed I sent gifts to Mecca and Medina during his reign as a show of respect for the holy cities.

Sultan Ahmed was responsible for replacing silver gutters with gold ones at the Holy Kaaba, the building at the center of Islam's most sacred mosque, Al-Masjid al-Haram, in Mecca. The sultan also sent a diamond worth 80,000 pieces of gold to the Prophet Muhammad's tomb and had some of the iron railings around the tomb replaced with gold.

Writer Fatih Karaboğa told Anadolu Agency that these gifts were not merely a show of wealth, but that they were sent with the idea that they could be utilized for the purpose of funding essential maintenance to the buildings when necessary.

The inscription is in the sülüs (Thuluth) style, showing great accuracy and a light relief effect on the silver. Thirty-three silver nails secure the inscription in place, while the words themselves describe the 14 Ottoman sultans who had come to the throne by that time.

The inscription begins with verses from the Quran, reading, "In the name of Allah, the Beneficent, the Merciful. Inform My servants that it is I who am the Forgiving, the Merciful. O Prophet, indeed We have sent you as a witness and a bringer of good tidings and a warner. And one who invites to Allah, by His permission, and an illuminating lamp. And give good tidings to the believers that they will have from Allah great bounty."

It then continues to list the Ottoman sultans from father to son, ending with Sultan Ahmed I. The inscription concludes, "This inscription is a gift of pure affection from Sultan Ahmed."