Looking for man's origins in a Bulgarian savannah 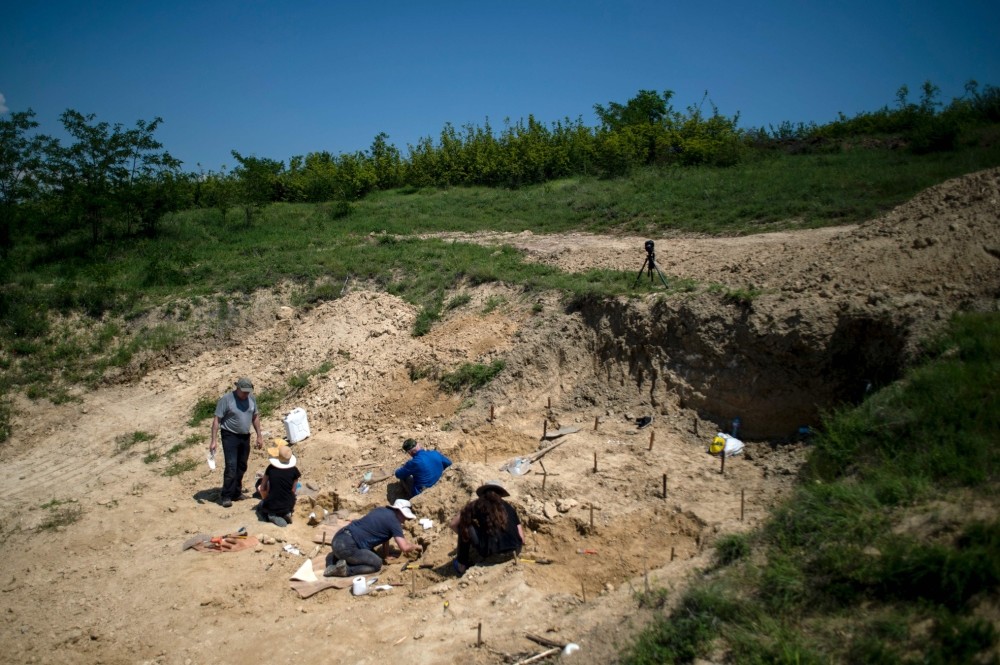 Paleontologists work near the site where a fossilised tooth with three roots was found in 2002, near the village of Rupkite.
by Jun 17, 2017 12:00 am

Seven million years ago the sunflower and corn fields in parts of southern Bulgaria were like an African savannah, roamed by gazelles and giraffes.

And perhaps also, amazingly, by the oldest known human ancestor - which most scientists have hitherto believed came from Africa.

A small team of researchers hopes to find proof of human origins in Bulgaria as they gingerly recover fossils from the clay of a dried-up river bed near the sleepy village of Rupkite in the June sunshine.

It all began in 2002 when the five-year-old grandson of local amateur paleontologist Petar Popdimitrov found what looked like a fossilized tooth with three roots.

"The whole of it was of a blue-greyish colour. It looked very worn out, especially the chewing surface. We thought that it was an animal one," Popdimitrov, 76, told AFP.

"But my son-in-law, who is a dentist, said in the evening that it might be human."

He might be right, in a way, and the discovery could be nothing short of momentous, potentially proving that humans diverged from apes not in Africa but in the eastern Mediterranean.

In 2007 Popdimitrov showed the tooth to Professor Nikolai Spassov from Bulgaria's National Museum of Natural History and to Denis Geraads from the Musee National d'Histoire Naturelle in Paris.

Now, 10 years on, a team led by Spassov and Madelaine Boehme from Tuebingen University in Germany have put forward the theory that the tooth matches a jawbone found near Athens in 1944.

Conducting new studies on the jawbone, discovered by German soldiers digging a bunker in World War II, and on the tooth and the fauna in the area of Bulgaria where they were found, the researchers have come up with a bold and controversial theory.

They posit that both items are from a creature called Graecopithecus, and that it was a hominin - the collective term for humans and our direct line of non-ape ancestors. Graecopithecus, the researchers hypothesize, migrated to Africa only later.

Previously it was assumed that the oldest potential hominin was the Sahelanthropus found in Chad in west Africa in 2001, Spassov said, and thought to be around 7 million years old.

"Now we think that it was the Graecopithecus found in Greece and Bulgaria because our two finds are several hundred thousand years older," he said.

The male Graecopithecus weighed around 40 kilos (90 pounds), as much as a female chimpanzee today, with massive and powerful jaws capable of chewing tree bark and chestnuts, Spassov said.

"We can also assume that it walked upright," he added.

Spassov's theory however has been widely criticized in scientific circles for lack of proof, prompting him to search for more evidence.

"This opposition stimulates our desire to find something more than a tooth and a broken jaw," he said.

"That's why we are here - to look for whatever part of a skeleton, preferably pelvis, hip, jaw or skull that will enable us to cement our theory and tell much more about our potential first ancestors."

Chronic lack of funding for scientific research and field trips in Bulgaria, the European Union's poorest country, has limited his team's excavations to just eight days this summer.

But they have unearthed hundreds of fossils that will be carefully cleaned and examined and hopefully turn out to be parts of Graecopithecus. Excavations are also expected to start in neighboring Greece and Macedonia in September.

The tooth meanwhile will take pride of place in Popdimitrov's new private museum in the town of Chirpan, near Rupkite.

"I have the feeling that I was in contact with something that had lived millions of years ago," he said.