Göbeklitepe was home to rites of skull, findings say 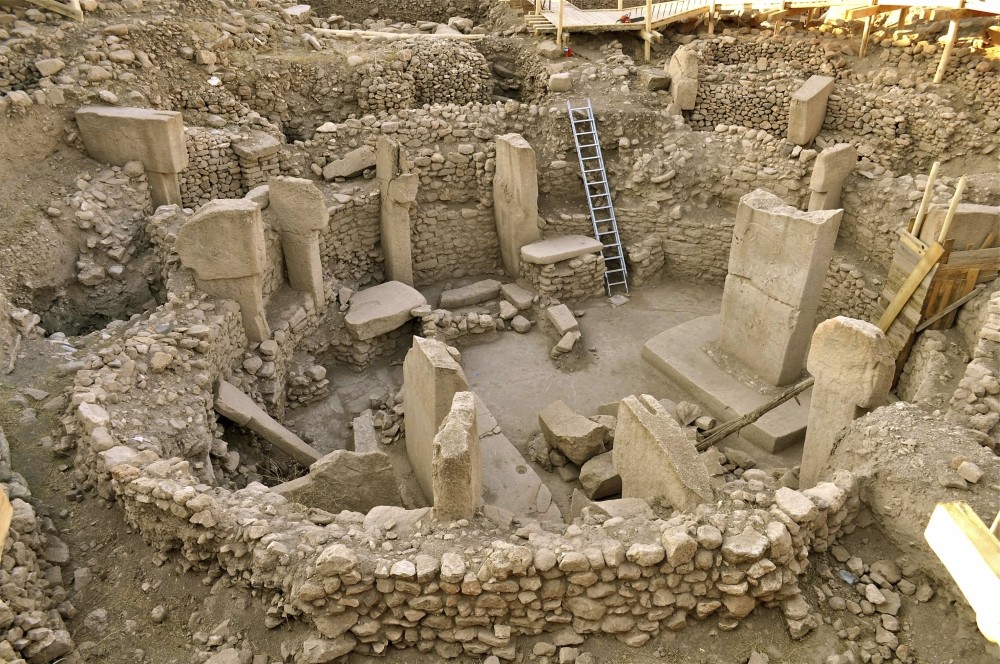 Important findings have been explored at the ancient settlement of Gu00f6beklitepe, including the world's first monumental temples and possibly the first patriarchal philosophy.
by Anadolu Agency Jul 04, 2017 12:00 am

Situated in the province of Şanlıurfa, the Göbeklitepe archaeological site, which has been under excavation for years, goes on yielding new findings, the latest of which are hollowed skulls that shed light on possible religious and social rites

Head of the Archaeology Department of Harran University, Faculty of Arts and Sciences Professor Mehmet Önal discussed an article claiming that skull rituals were conducted at Göbeklitepe. He said that such news has been expected for a long time, based on previous findings at the Göbeklitepe archaeological site.

Referencing an article published in the journal Science Advances, Professor Mehmet Önal spoke to Anadolu Agency (AA) and said three pieces of skull had been found, most likely belonging to adults, and that the individuals had first been scalped, their skulls boned, then hollowed by flints.

Explaining that these theories suggest the pieces of skull bones may be related to some kind of skull cult, Önal added, "It has been about 22 years since the first archaeological excavation began at Göbeklitepe in Şanlıurfa province. Under the pioneering leadership of the deceased German archaeologist, Klaus Schmidt, important findings were explored at the ancient settlement, including the world's first monumental temples and possibly the first patriarchal philosophy. In the article published in Science Advances, the three pieces of skull, which are claimed to be the earliest skulls known to have been deliberately hollowed in the world, are described in detail. The authors state that the grooves in the bone may have been carved out in order for the skulls to hang on something. The three pieces of skull, which were found during the time of the deceased Klaus Schmidt and then analyzed and researched before being published, reveal another important role of Göbeklitepe." 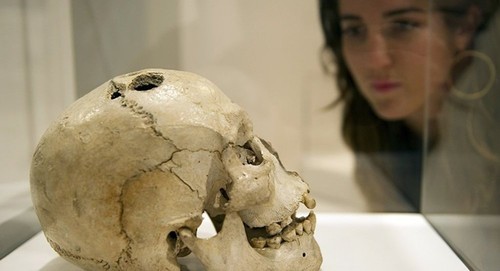 Experts claim that rituals related to death may be rites of "worshipping the ancestor" or of some sort of "religious blessing."

Rite with the first hollowed skulls

Önal stressed that the theory of a head cult had been already suggested by previous findings unearthed at the excavations and added, "The beheaded human body relief situated next to the vulture figure on the obelisk of Temple D and the round figures on some obelisks that have been interpreted as disembodied heads, gave rise to a suspicion of a head cult years ago. This tradition, which is generally found among pre-pottery Neolithic settlements, was in fact expected in Göbeklitepe. These latest findings shared with the public prove that these expectations were well-founded. Experts also claim that such rituals related to death may be rites of 'worshipping the ancestor' or of some sort of 'religious blessing.'"

Önal pointed out that with the evidence of the hollowed skulls and possible head cult, an unknown role of Göbeklitepe affecting the cultures of the region has been revealed.

"These skull fragments that belonged to the hunter-gatherer people who created and built Göbeklitepe are also important in terms of providing information about the physical conditions of the Göbeklitepe people. There is no doubt that with the ongoing excavations, more secrets of Göbeklitepe will be unearthed."

First discovered during surface studies carried out by researchers from Istanbul University and the University of Chicago, excavations at Göbeklitepe have been ongoing ever since.

Conducted within the framework of cooperation between the German Archaeological Institute in Berlin and the Şanlıurfa Museum since 1995, the excavations have unearthed the following artifacts:

T-form stone obelisks carved with animal figures dating to the pre-Neolithic era, with a height of 3 to 6 meters and weighing 40 to 60 tons; the remains of the oldest temples in the world, which are round or rectangular in form and eight to 30 meters in diameter; numerous figures of wild animals, human figures and a sculpture with a height of approximately 65 centimeters dating back to 12,000 years ago.

Several projects are currently being conducted to promote Göbeklitepe, which is thought to be the oldest ritual center in the world, and which was placed on the UNESCO List of World Heritage six years ago.