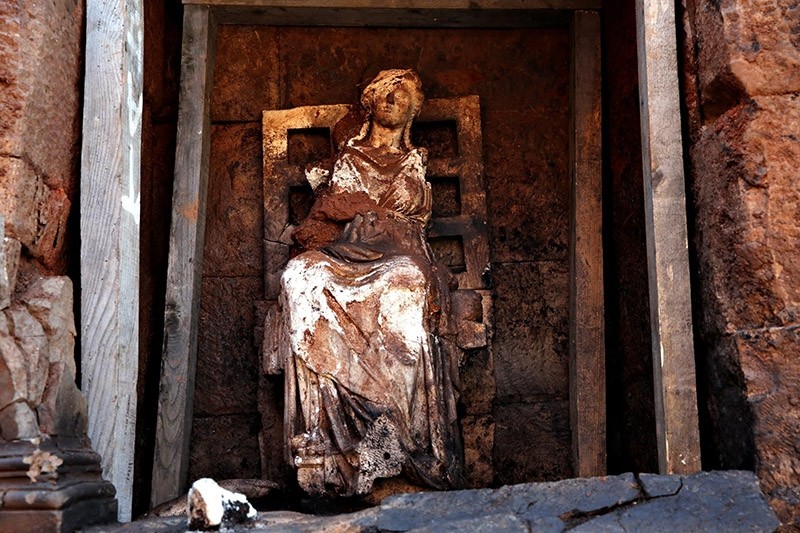 Archeologists have resumed their efforts to excavate a marble sculpture of Cybele, the mother goddess, in northern Turkey's Ordu province located on the Black Sea coast.

A team of 20 archeologists led by the head of the Department of Archeology in Gazi University's, Professor Süleyman Yücel Şenyurt, discovered the ancient artifact last September in the 2,300-year-old Kurul Kalesi, or the Council Fortress.

The 110 centimeters tall sculpture of the goddess sitting in her throne weighs an impressive 200 kilograms and is being showcased in the archeology museum in Ordu.

According to the Mayor of Ordu, Enver Yilmaz, the excavation work is very important for learning about the history of the region. He explained that the statue of mother goddess Cybele statue was visited by 2000 people in only 45 days. The historic artifact will be open to further visitors after all the necessary restoration and conservation work has been completed.

Some 60 people under the leadership of Professor Şenyurt will be responsible for the continuation of work at the excavation site.

An Anatolian mother goddess, Cybele symbolizes prosperity with her pregnant belly, seated on her throne.

In Anatolian mythology Cybele personified the earth. In Greek mythology, she was equated to the Earth-goddess Gaia, and was mostly associated with fertile nature, mountains, towns and city walls, as well as with wild animals including the lion.