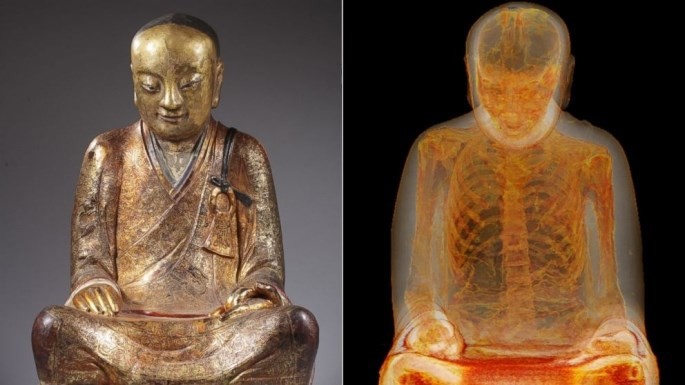 The human-sized sitting Buddha statue called the u201cZhanggong Patriarch,u201d disappeared from a temple in Yangchun in late 1995 after being worshipped for centuries.
by Jul 14, 2017 12:00 am

A Dutch court Friday will hear arguments involving ownership of a 1,000-year-old mummified monk in a case brought against a local collector by Chinese villagers who claim their ancestor was stolen.

The small eastern Chinese village of Yangchun will square off against a Dutch collector, whom they said bought the stolen Buddha statue containing the remains of a monk in Hong Kong in 1996, a lawyer representing the village said.

The human-sized sitting Buddha statue, called the "Zhanggong Patriarch," disappeared from a temple in Yangchun in late 1995 after being worshipped for centuries, Jan Holthuis said.

"We are going to present our arguments to a judge to explain why the villagers want their statue back," he told AFP.

Missing for two decades, the Buddha statue resurfaced when villagers in 2015 recognized it as part of a display at the "Mummy World Exhibition" at Budapest's Natural History Museum.

The statue was subsequently withdrawn.

itled to have their ancestor returned to his rightful place, the lawyer said.

The lawyers will argue that according to Dutch law "a person is not allowed to have a known body in their possession," Holthuis said.

"We also have enough evidence to prove that the statue is indeed the one that was stolen from the temple," he added.

"The fact that it was sold a few months after it was stolen, that it contains certain texts referring to the name 'Zhanggong' and that its dating more or less corresponds to the period that the monk was alive," were some of the arguments which will be presented, he said.

However, on Wednesday the statue's immediate whereabouts were not known as the original collector allegedly swapped it with a third party in 2015, Holthuis said.

The Amsterdam-based collector's lawyers declined to comment to AFP.

The case is being closely watched as it could mark one of the first successful retrievals of Chinese relics in court, the state-run Chinese newspaper Global Times reported on Tuesday.

Previously similar retrievals have been done through diplomatic channels, the paper said.

Beijing in recent years has vehemently protested the sale of artifacts it says were stolen, particularly in the 19th century, when European powers began encroaching on its territory.