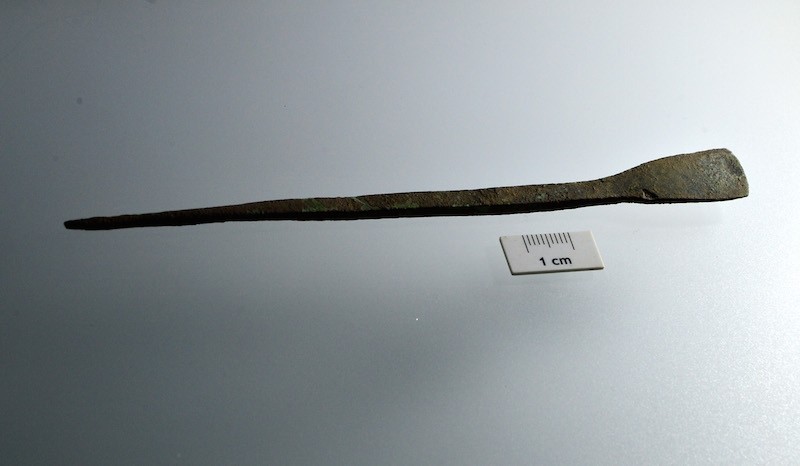 Researchers have unearthed a 1,800-year-old writing tool, or stylus, at the Assos archeological site in northwestern Turkey.

Assos, also known as Behramkale, was one of the most important port cities of the ancient age and possesses crucial cultural heritage from the region's Roman period, including an antique theater, agora, necropolis and walls.

Speaking to Anadolu Agency, head of the Assos excavations, Professor Nurettin Arslan of Çanakkale Onsekiz Mart University, said the bronze instrument had a point at one end and a flat edge at the other.

According to Arslan, this tool would have been used to write, take notes and make calculations on wax tablets used in that period.

"The flat part at the back side of the stylus was used to make corrections," he said, likening it to today's erasers.

Noting that students and merchants of the time used these kinds of writing tools, Arslan said that some pupils would have used it to write on sand or ceramic floors.

"Students who were financially better off, used it to write on wax tablets, to learn how to read and write as well as to practice their handwriting," he said.

Merchants and rich people who did their own accounting also used these kinds of implements, he added.

According to Arslan, one needed to be literate to own this kind of stylus. He said that not only free people but also some slaves were literate at that period.

"Educated slaves could also use these ... for their owners' calculations or for certain notes," Arslan added.

According to Arslan, as people during that period used wax tablets, they needed to make their writing tools from a hard material. That is why bronze or bone was generally used to make a stylus.

The Turkish archeologist said every period had their own stylus designs, but bronze was used more commonly as it is a hard material and difficult to break.

Arslan also said Assos excavations had uncovered a piece from a 2,500-year-old vase, which was imported from Athens, as well as another 2,000-year-old ceramic remnant.