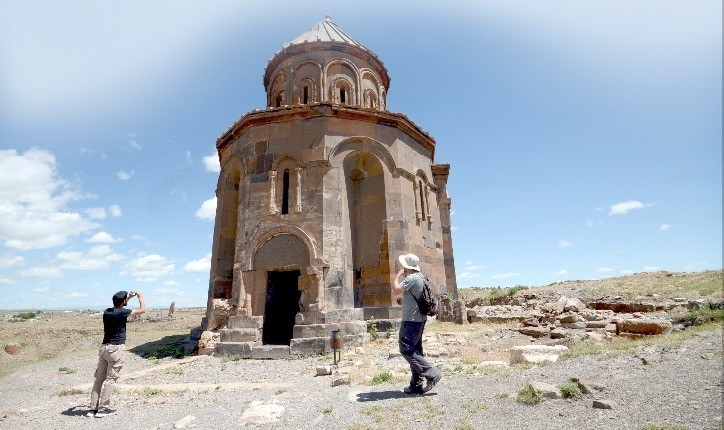 Named as ‘the world city' and ‘the cradle of civilizations' for hosting many civilizations throughout history, the Ani archaeological site has been flooded with visitors since it was added to UNESCO's World Heritage List

Ani site, which is on the Turkish-Armenian border, is known as "the world city" or "the cradle of civilizations" for hosting many civilizations through the history and the place nearly doubled the number of the visitors after it was included in the World Heritage List of UNESCO (U.N. Educational, Scientific and Cultural Organization).

Ani, near the Arpaçay district of Kars province, was the capital of Armenian Empire between 961 and 1045 in the period of Pakradouni Dynasty. Housing the 11th and 12th- century-works of Islamic architecture and added to UNESCO's World Heritage Tentative List, the ancient city was included in World Heritage List on July 15, 2016. 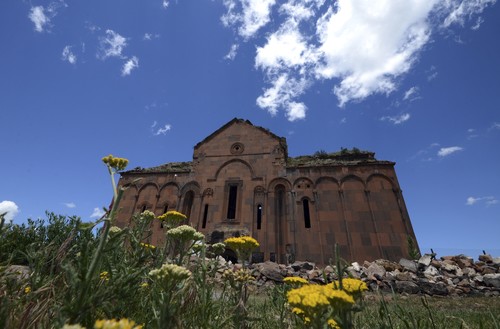 Having the first settlement around the year 3,000 B.C., Ani was ruled by Sacas, the Sasanians, the Bagrat Kingdom, Byzantium, the Principality of Şeddatoğulları, the Ani Georgian Atabegs, the Ilkhanids, the Seljuks, Karakoyunlus, Akkoyunlus, the Russians and the Ottoman Empire. Some works of these civilizations are attracting quite a number of guests in Ani.

"The world city" Ani presents masterpieces such as the Amenaprgiç Church, the Ani Cathedral, the Dikran Honentz Church and the Abugamir Pahlavuni Church to visitors.

As the first gate of Anatolia from Caucasus, the Ani site hosted a total of 21,780 foreign and local visitors prior to the year it was added to the UNESCO World Cultural Heritage List. After being added to the list, Ani was flooded with visitors and this number rose to 42,635.

Kars Museum Director Necmettin Alp spoke to Anadolu Agency (AA) and provided information about Ani's UNESCO Heritage List. "The Ministry of Culture and Tourism applied with UNESCO for Ani's inclusion on the list. Having been added to the tentative list in 2014, Ani was evaluated between 2015 and 2016. The teams of UNESCO came here and the Ministry, together with the UNESCO teams, worked to eliminate shortages in the area. After the meeting in Istanbul on July 15, 2016, Ani was added to the UNESCO Cultural Heritage List as the 16th heritage site of Turkey," Alp noted.

Stressing the continuity of the works under the control of the Kars Museum Directorate, Alp said, "After its inclusion, the interest of the Ministry of Culture and Tourism has increased. Works for the building of a reception center, facilities and an excavation house within the environmental planning project titled the "Reconstruction Plan for Protect" started this year."

"The tourist circulation was increased in the Ani site like other heritage sites such as the ancient Ephesus archaeological site, Ihlara Valley and the Hagia Sophia Mosque. We have seen an increase over 40 percent. We hope this rise will continue. Actually, the number of visitors is evidence of this," Alp informed.

Noting that tourists will have easy access to the caves after completion of the works, Alp concluded, "Ani is a world heritage site and very important for the Kars region. It is one of eastern Anatolia's most important archaeological sites open to visit, along with the İshak Pasha Palace. Restoration, scientific excavations and research are continuing at a fast pace. We hope that the Ani site will be improved with its new walking trails and that tourists will reach the caves easily."