Ancient city in Amasra under excavation 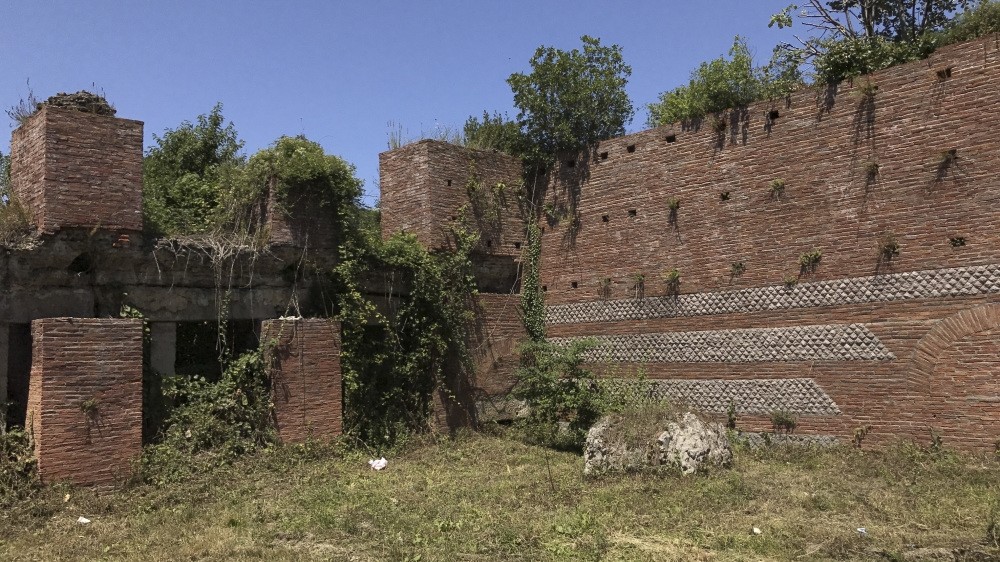 A number of ancient structures have already been unearthed from the Byzantine and Roman eras.
by Anadolu Agency Aug 11, 2017 12:00 am

Already considered a treasure due to its natural and geographical beauty, the Amasra district in the Black Sea province of Bartın is now the site of excavation unearthing a presumably 5,000-year-old ancient city

Featuring a museum full of numerous ancient artifacts, many of which were found by chance, the Amasra district of the Bartın province is conducting an excavation aimed at unearthing a 5,000-year-old ancient city.

Amasra's coast was host to the Phoenician colony, Sesamus, in the 12th century B.C. The colony's heyday was during the rule of Iranian Princess Amastris. As a result, the artifacts found during the excavation carry the traces of a 5,000-year-old history. With the permission of the General Directorate of Cultural Heritage and Museums and the support of local administrative bodies, many pieces belonging to the Archaic, Classical, Hellenistic, Roman, Byzantine, Genoese and Ottoman periods have been found at the site. The new excavations under the presidency of the district's Amasra Museum Directorate have been particularly exciting for archaeologists.

Analysis has shown that glorious structures once stood on the spot in ancient times. Therefore, the unearthing of artifacts belonging the Roman and Byzantine period holds even more significance.

Amasra Museum director Baran Aydın told Anadolu Agency (AA) that Amasra is a cultural center, not only thanks to its natural beauty, but also for its historical significance and how that can translate to cultural tourism.

Aydın explained that in the ancient times, important structures, including theaters, bazaars, fountains, aqueducts, council buildings and sanctuaries, in the district were all named Amastris during the Hellenistic period. "The requests for excavation work in the archaeological site located near the covered bazaar had validity. After some infrastructural work, the excavation finally got started. A road excavation near the covered bazaar, where there may have been once been a temple, are ongoing. We also started to survey the ancient Amasra city ruins to create a 'master ancient city' map in cooperation with Bartın's landscape department. The project will continue for years and will contribute to the tourism in the district. In the end, our aim is to attract the attention of local and foreign tourists. We have many stationary structures, such as the ancient theater and acropolis. When we consider the things that are already visible, like the fortress of Amasra and others, we can only imagine the things that have yet to be unearthed," said Aydın.

Implying that many artifacts and structures have been unearthed, including a store room belonging to the Byzantine period, bathrooms from the Roman period, a meeting room and mosaic houses, Aydın said they know there is an ancient city under the non-residential areas, and that there are also many artifacts, such as bronze coins, earthenware oil lamps, pottery and cube parts along with the bathrooms, houses and the theater.

Implying the ruins can sometimes provide clues about the impressive pieces hiding underground, Aydın said: "We think, in the Roman Period, 20,000 or 25,000 people were living in this area in which 6,000 people live now. Therefore, this shows the settlement encompassed a large area. Even if modern buildings and apartment bases have covered parts of the ancient city, the rest of the area could still be intact. We aim to unearth this ancient city through archaeological excavations in the district where drilling is still ongoing."

Talking about their hopes for the area, Aydın concluded saying: "Having had a 'Geographic Information Systems' data bank, knowledge and experience about the area is a great basis for future preservation. The excavation area will be open to local and foreign tourists for visitation. Therefore, tourists can experience this important site here. Sections of Amasra, along with the minor and major ports, could become an intellectual destination for cultural tourism."