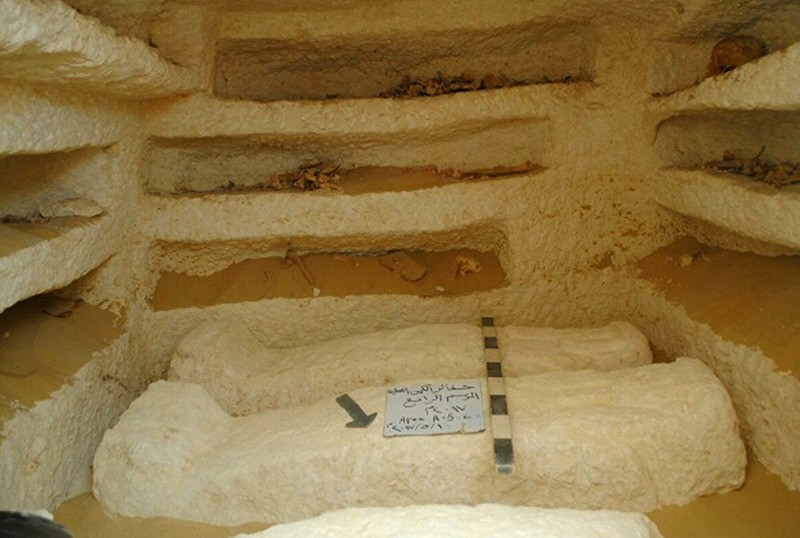 An undated handout photo made available by Egyptian Ministry of Antiquities shows ancient tomb and sarcophagi discovered in Minya governorate, Egypt (AFP Photo)
by Aug 15, 2017 12:00 am

Egypt archaeologists have discovered three ancient tombs containing sarcophagi in the south of the country in a cemetery dating back about 2,000 years, the antiquities ministry said Tuesday.

The tombs excavated in the Al-Kamin al-Sahrawi area in Minya province south of Cairo were in burial grounds constructed some time between the 27th Dynasty and the Greco-Roman period, the ministry said in a statement.

The team found "a collection of sarcophagi of different shapes and sizes, as well as clay fragments," the statement quoted Ayman Ashmawy, head of the ministry's Ancient Egyptian Antiquities Sector, as saying.

One of the tombs, which was reached through a shaft carved in rock, contained four sarcophagi each sculpted to depict a human face

Another tomb held the remains of two sarcophagi and six burial holes, including one for "the burial of a small child".

Clay fragments found at the site "date the tombs between the 27th Dynasty (founded in 525 BC) and the Greco-Roman era (between 332 BC and the fourth century)," the statement said.

The discovery "suggests that the area was a great cemetery for a long span of time," it quoted Ashmawy as saying.

In one of the three tombs, excavators found bones believed to be the remains of "men, women and children of different ages", Ali al-Bakry, head of the mission, was quoted as saying in the statement.

This shows that "these tombs were part of a large cemetery for a large city and not a military garrisons as some suggest," he said.

This work follows previous excavation at the site, which began in 2015.

"Works are underway in order to reveal more secrets," the statement said.

Egypt boasts an array of ancient sites including Pharaonic temples and the famed Giza pyramids that draw millions of tourists every year.