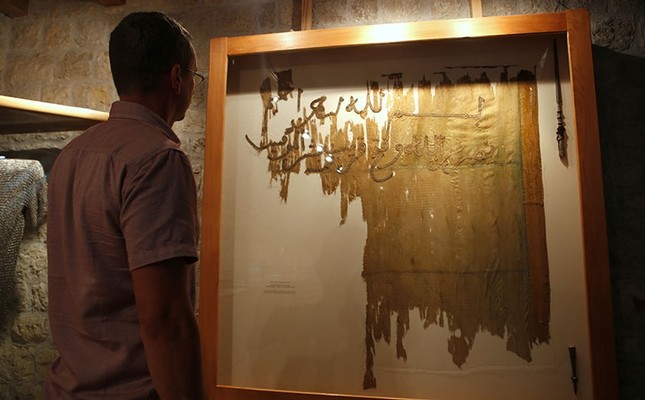 The military banner used in the Battle of Mohacs, which is considered as one of the most significant victories of the Ottoman Empire in Europe, has been carefully preserved for nearly five centuries in the town of Tesanj, Bosnia-Herzegovina.

The Battle of Mohacs was fought on August 29, 1526 between the forces of the Ottoman Empire and the Kingdom of Hungary. It is estimated that the banner was carried by the troops joining the battle from Tesanj, located some 90 kilometers north of Sarajevo.

Nearly 20,000 soldiers from Tesanj had joined the Ottoman forces led by Sultan Suleiman the Magnificent to fight against the Hungarian forces. A chief of the local Sehagic family was killed in the battle and the banner used by the Bosnian unit was sent back to the chief's family in his honor.

Since that very day, the Sehagic family managed to preserve the flag. When the last remaining male heir of the family died, they handed over the flag to the Tesanj Museum in 2015.

The flag has been on display at the museum, which is located in the historic Tesanj Castle, for almost a year, and attracts the tourists. In addition to the flag, hundreds of years old yataghans, a type of Ottoman knife or short sabre used from the mid-16th to the late 19th centuries by janissaries, are also being exhibited at the museum.

Museum director Ernad Prnjavorac noted that the banner, which features a verse from the Quran, is one of the most significant pieces exhibited at the museum, and the flag especially attracts a lot of Turkish visitors.

"The banner establishes the historical tie between Turkey and Bosnia-Herzegovina," Prnjavorac said.

Moreover, the director stated that the flag has both historical and spiritual value, adding that "In the years before the Bosnian War a lot of people offered money to buy the flag from the Sehagic family but they rejected every offer and did not sell the flag."

Prnjavorac ended his words by mentioning that Ahmet Sehagic, the grandfather of the three sisters who handed the flag to the museum, and Haci Hamdo Sehagic, their great-grandfather, lay in the graveyard in Dionlagicka.

The Battle of Mohacs, which caused the Kingdom of Hungary to collapse, left no threatening powers in the way of Ottomans in the Balkans and Romania. Most parts of the kingdom were conquered by the Ottomans, which was backed by the Hungarian nobility, whereas a smaller portion was taken by Habsburgs in Austria, causing the two empires to fight over the control of central Europe for the next three centuries. During this period, Ottomans laid siege on Vienna twice, in 1529 and 1683, marking the farthest Ottoman advance in central Europe.

The battle was also significant in European military history for the large scale use of artillery and muskets by the Ottomans, causing the Hungarian army to collapse within hours.

Share on Facebook Share on Twitter
Previous in History Preserved by the Bosnian villages within the borders of Prizren in... Next in History Traces of what could be the world's oldest wine have been discovered...
DAILY SABAH RECOMMENDS