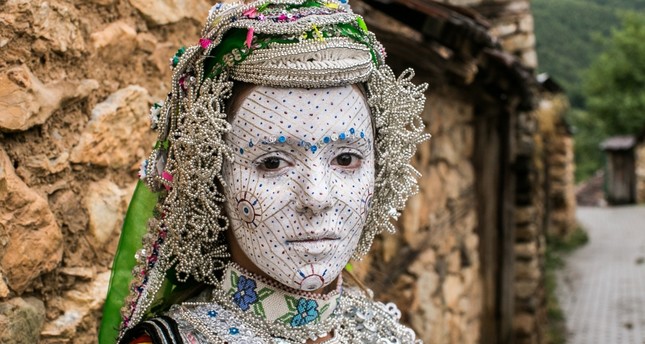 Preserved by the Bosnian villages within the borders of Prizren in South Kosovo for hundreds of years, the bridal makeup tradition is kept alive.

The traditional bridal makeup, which is still continued in Donje Ljubinje, Gornje Ljubinje, Manastrica, Musnikovo and Planjan villages, attracts the attention of local and foreign ethnologists.

Consisting of red, blue and golden circles and little spots put on the white color layered on the face of the bride-to-be, the motives are evaluated in various ways by ethnologists.

It is said that the three golden circles drawn on the bride's face represent the three phases of life, which are bound to each other with golden paths, while the red ones represents fertility and the remaining blue spots represent a happy and healthy family.

One of the last representatives of this ancient tradition sinking into oblivion is Aziza Setifagic. She is one of those who has faithfully sustain the tradition.

Setifagic, 65, spoke to Anadolu Agency (AA) and said this extraordinary makeup tradition is descended her from her mother-in-law and added, "I want to hand down this tradition, which I developed within time, to someone."

Explaining that her daughters and daughter-in-laws are living abroad, Setifagic mentioned a women from the village. She added that when she is unable to continue doing the makeup, she will hand down the mission to the women.

Coloring the wedding ceremonies of Kosovar Bosnian girls, Stefagic said she had a chance to promote the tradition in Brussels under the context of a program organized by the Foreign Ministry of Kosovo.

Aziza's husband Adil Stefagic also said the old traditions gave way to the new ones and the bridal makeup tradition, which is still followed in their village, was already forgotten in some villages.

Although the villages following the tradition are close to each other, there are some little differences in the motives, said Adil Stefagic and added, "For example, in Donje Lubinje they use more vibrant colors."

Stating that the makeup is made with various motivations, the most important mission of that is protecting the bride against the evil eyes of the guests, Adil Stefagic implied.

Share on Facebook Share on Twitter
Previous in History Archaeologists have uncovered the tomb of a renowned Ming Dynasty... Next in History The military banner used in the Battle of Mohacs, which is considered...
DAILY SABAH RECOMMENDS