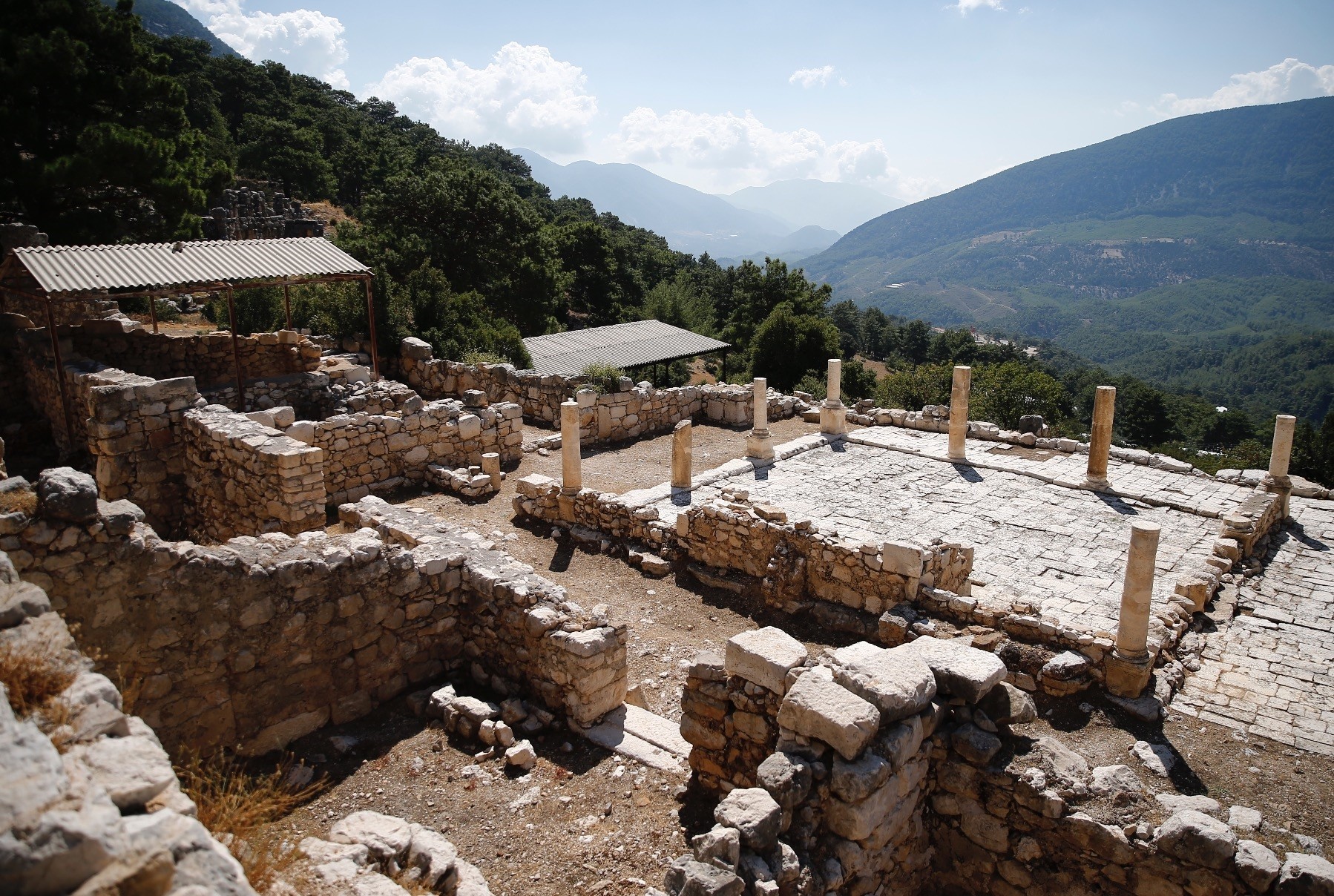 A villa structure that is thought to have been built in the early fourth century was unearthed during the excavations.
by Anadolu Agency Sep 16, 2017 12:00 am

Villa ruins that are almost 2,000 years old were uncovered during excavations in the ancient city of Arykanda, located in the Finike district of Antalya, where significant remains reveal the importance of the region.

Associate Professor Macit Tekinalp, who leads the excavation, told Anadolu Agency (AA) that Arykanda was an ancient city built on terraces due to the topographical features of the region. Indicating that public buildings were also built on terraces that were created particularly for that purpose, Tekinalp said that Arykanda, meaning "the place next to the high rock," got its name from a huge rock located next to it.

Emphasizing that the place was named after that spot, while most ancient cities were named after their founders, Tekinalp said that excavations had been going on in the region for 47 years.

He noted that the ancient city was known as "the place where lotus eaters live" in some resources and added: "There were six hamams in this ancient city. The expression 'lotus-eater' might have been used due to the high number of hamams. The city is located on the mountainside and is difficult to reach. We do not have much proof that there was a very luxurious life here."

In addition to saying that Arykanda was an ancient city not located on Alexander the Great's route and did not witness many wars, Tekinalp stressed that it had all the advantages of being located on a main road. He said that a villa structure that is thought to have been built in the early 4th century was unearthed during the excavations, and it provided them with very interesting data about the period even though it might have been destroyed in a fire.

"We think the villa was ruined by a fire around the year 435. It gave us interesting archaeological data. Ancient cities that suffered from fires and earthquakes are very significant for archaeologists because we can see items that people weren't able to take away. We found the name of the person who used this villa, as information about this person was written on mosaics dug up from the floor of the building. The name on the inscription is Pierus, who must have had a big family. The structure was a huge villa with eight large rooms and a second floor, which we think was destroyed in a fire," said Tekinalp.

In addition to saying that the villa benefitted from a city view and was one of the most prestigious houses in that period, Tekinalp added: "Pierus had a special hamam for himself and his family. When they didn't use the hamam themselves, the family used it for commercial reasons and rented it out. The villa was later turned into two-room housing. There was a pool in the garden of the villa, and that pool had a view. Those findings are resources which shed light on the daily life of an aristocrat who lived in the 4th century." He said that they think the second floor of the villa was built on wood and mosaics were engraved into the wood.

Pointing out that even though it was medium-sized, the city had six hamams, Tekinalp added: "Hamams create an attraction center in a city. People from seaside towns preferred to come to the city to cool off and get clean. The region was used as tableland. We think there was domestic tourism in the region even in that period. Otherwise, we cannot explain the existence of six hamams. The population was insufficient for those hamams. It was the most significant linking road in the Lycia region connecting the seaside to the Anatolian plateau. It was a place where those who used this road stayed. Being located in a region between Finike and the Anatolian plateau enabled this city to be a place where those who passed through stayed and rested."