‘Ephesus of the Black Sea' to be excavated 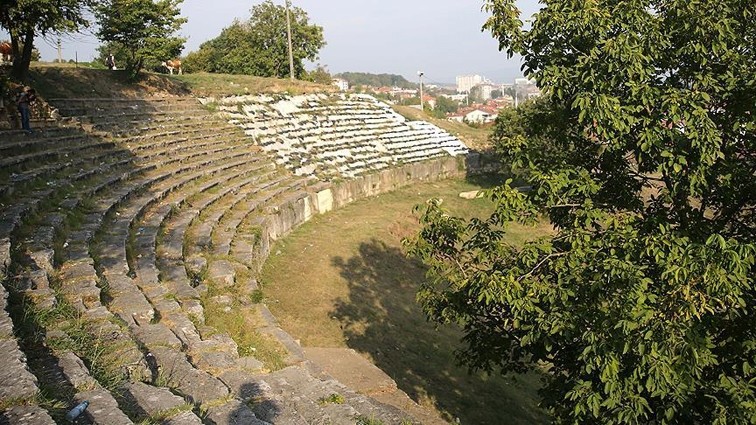 Known as the ‘Ephesus of the Black Sea region,' Prusias ad Hypium, the only ancient city left standing in the Bithynia region, is being unearthed by archaeologists

In a region known by historians as "Prusias ad Hypium" situated in the town of Konuralp in Düzce Province, archaeologists are uncovering an ancient theater, gates with horse figures, city walls, aqueducts and the Roman Bridge.

The ancient theater includes a semicircular seating area that measures 100 meters in length and 74 meters in width, known as the "40 Steps," which are ornamented with designs of lion paws and archways and a part of the theater's stage, which survived to the present day.

Initiated by the Ministry of Culture and Tourism, the Governorship of Düzce, the Archaeology Department of Düzce University (DU), the Konuralp Museum Directorate and the Düzce Municipality nearly two months ago, excavations are ongoing as a team of researchers continue to make amazing discoveries, including a corridor entering the orchestra pit of the ancient theater and a theater entrance that was constructed with great attention to detail.

Speaking to Anadolu Agency (AA), Konuralp Museum Director and head of excavations Züleyha Kartal Önemli said that the surviving part of the theater that is subject to archaeological digs is being revealed more day-by-day as a result of this year's excavations.

Stressing that excavations focused previously on the West Parados entrance and the uncovering of the first part of a tunnel there, Önemli stated that spectators entered the theater via this tunnel in ancient times, adding that parts of the structure were constructed later. She added that the first part of the orchestra pit has been uncovered by archaeologists.

Implying that this year's excavation is going well, Önemli said: "DU academicians have supported us. We will continue our works at this site. In 2018, we plan to excavate in a different area as a sequel to the current works. Archaeological excavations are long-term projects. So, we don't expect the entire theater to be unearthed immediately. This is a magnificent, rich ancient city, and it is obvious that it was a prosperous place during the Roman period. The ancient theater is the only theater to have been excavated in the Black Sea region."

DU Archaeology Department Assistant Professor Emre Okan also referred to the magnificence of the area's ancient history, saying this reflects the cultural richness that existed at the time of its construction.

Saying that a different structure was built over the theater 150 years after it was completed, Okan said: "Walls featuring the same materials that were used in the theater's construction, as well as architectural pieces, were found. We unearthed part of the theater's walls. After we complete the official permissions and documentation, we will continue to go deeper in these layers. The excavation team has worked devotedly, and they have managed to conduct great work, successfully unearthing an important part of this magnificent structure."

Asserting that the theater is located on an area of 15,000 square meters, DU Archaeology Department Assistant Professor Ahmet Bilir said: "The stage building is 50 meters long. On the other hand, the benches measure 75 meters in width and 100 meters in length. From this discovery, we can see that this was a glorious theater."

Adding that the city saw its wealthiest economic times during its heyday of the Roman era, Bilir added: "We can understand by examining ancient coins found at the site as well as the descriptions engraved on the coins. Based on these findings, we learned that the city was home to a fertile plain fed by the Melen River. The name of the city also comes from this river. It is not surprising that this large city had such a grand theater. It is located between two ancient metropoles, comparable to Istanbul and Ankara. Thus, it is important for both archaeological and touristic aspects thanks to its unique location."