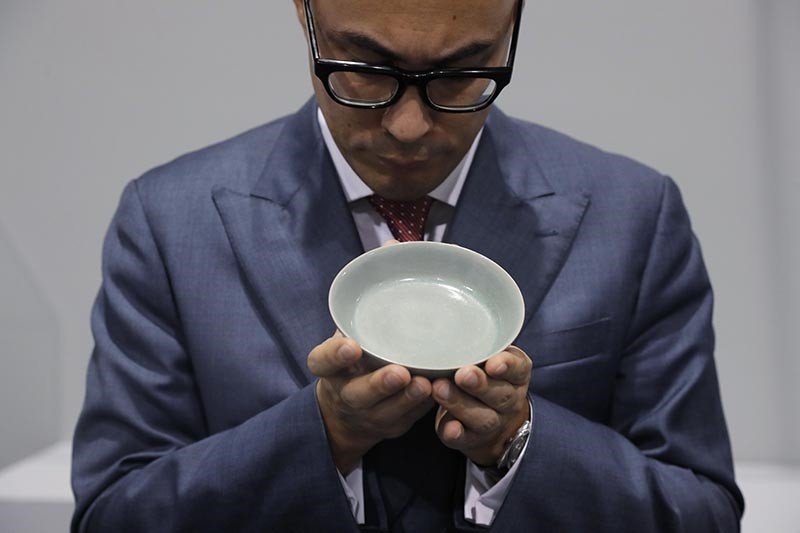 The small piece -- which dates from 960-1127 -- stole the previous record of $36.05 million set in 2014 for a Ming Dynasty wine cup which was snapped up by a Shanghai tycoon famous for making eye-watering bids.

Such "Ru guanyao" wares -- known for their intense blue-green glaze and "ice-crackle" pattern -- are extremely rare because the kiln in China's central Henan province had a brief production run of only around two decades.

The bowl, from the Chang Foundation in Taiwan's Hongxi Museum, is one of only four known pieces of Ru heirlooms in private hands. Since 1940, no more than six Ru vessels have ever appeared at auction, according to ceramics expert Regina Krahl.

"It's a totally new benchmark for Chinese ceramics and we've made history with this piece today," Nicolas Chow, deputy chairman of Sotheby's Asia, told reporters.

Bidding started at around $10.2 million with the suspense-filled auction lasting some 20 minutes as a handful of phone bidders and one person in the room itself competed with each other.

The winning offer eventually came from one of the phone bidders and was received by a round of applause.

The bowl -- originally designed to wash brushes -- is an example of extremely rare Chinese porcelain from the imperial court of the Northern Song Dynasty and one of only four such pieces in private hands, according to Sotheby's.

The price tag exceeds the earlier record made by a tiny white piece known as the "Chicken Cup," decorated with a color painting of a rooster and a hen tending to their chicks, and created during the reign of the Chenghua Emperor between 1465 and 1487.

That cup sold in 2014 to taxi-driver-turned-financier Liu Yiqian, one of China's wealthiest people and among a new class of Chinese super-rich scouring the globe for artwork and antiquities.

He famously drank tea from the dainty vessel after his purchase, causing something of a social media meltdown in China at the time.

Earlier this year a giant diamond named the "Pink Star" broke the world record for a gemstone sold at auction when it fetched $71.2 million.

The 59.60-carat rock was sold to the city's Chow Tai Fook jewelry chain which has a strong presence across East Asia.

Last year the city's auction houses set a record for the most expensive designer handbag -- a diamond-encrusted crocodile-skin Hermes handbag with white gold details that sold for $300,000.

China's various dynasties were renowned for their fine ceramics with the Song period often regarded as producing some of the region's most superb examples.

Song ceramics are particularly known for their subtlety, simplicity and exquisite glazing and have long been among the most sought after objects for collectors.