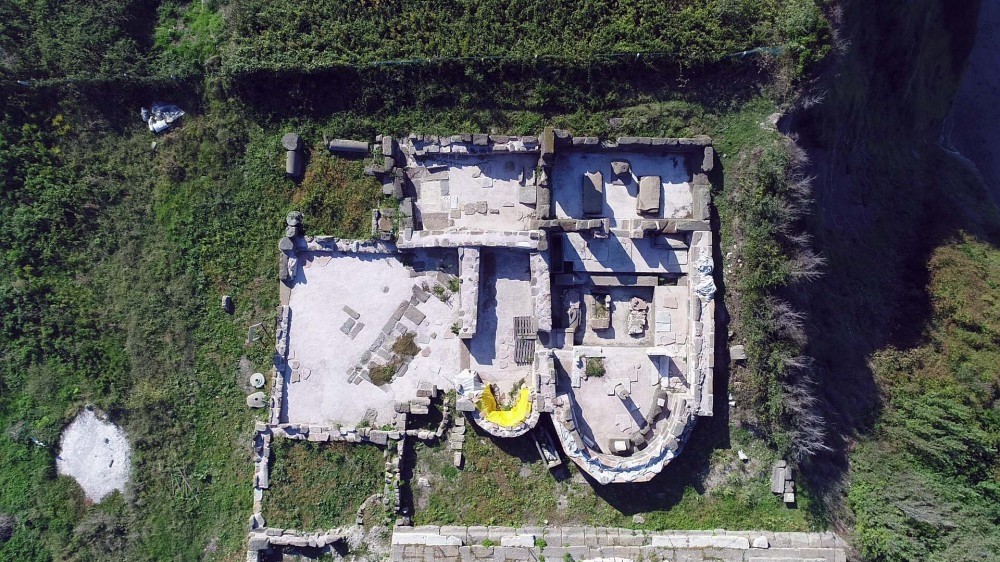 The ancient port, temple, theater and settlement areas unearthed have so far helped to reveal the socio-economic structure of the region.
by Anadolu Agency Oct 13, 2017 12:00 am

What has been found in the ancient city of Tium in the Zonguldak province gives hints about the social and economic life of the area through the centuries and various reigns with its port, temple and ancient theater

Findings from excavations in the ancient city of Tium, located in the town of Filyos in the Çaycuma district of Zonguldak province, illuminate the history of this area and the Black Sea region.

Excavations began 11 years ago, and part of this year's work has already been completed.

The ancient port, temple, theater and settlement areas unearthed so far reveal the socio-economic structure of the region, which was scanned with a drone by Anadolu Agency (AA). Efforts to introduce the unearthed sites to tourism are ongoing.

Şahin Yıldırım is the head of the Bartın University Department of Archaeology and head of excavations at Tium.

Yıldırım told AA: "The very first work started at the acropolis, called 'Uptown,' and has been ongoing for 11 years because it is the first ancient city of the Black Sea, having been established in the sixth century B.C., and the first sites were at the acropolis where we found settlements dating back 3,000 years. We kept working in other areas, which were important for us scientifically, as it is the only excavation of an ancient city that isn't under a modern settlement in the Black Sea. Many ancient cities are under modern settlements. Filyos is an authentic archaeological site in this aspect." 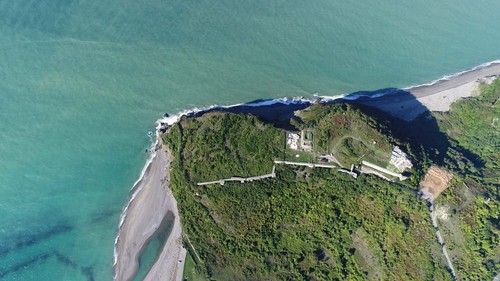 Explaining that the archaeology of the Black Sea region is untouched compared to the Aegean and Mediterranean regions, Yıldırım said: "The findings can enlighten us as to the ancient period of the Black Sea shores of [modern-day] Turkey. Thus, they attract attention, especially in international symposiums."

Noting they found a Roman temple dating to 2 A.D., Yıldırım added: "Amasra has the only ancient theater in the Black Sea region, but a cemetery is located on it. We have worked on the ancient theater there, which could hold an audience of 5,000. Modern roads cause trouble, but when they are solved, work will continue, particularly restoration."

Yıldırım mentioned that the ancient port was one of the most important parts of Filyos, and it is the steadiest ancient port in the Black Sea.

"It is one of the steadiest constructions from ancient times. We have been working underwater here for two years, including test dives. Nearly eight wrecks have been found. These wrecks date from the Roman period to the Ottoman-Islamic period, showing that this port has been used for a long time. The archaeological work under water will continue next year, which is a rare example on the Black Sea coasts of Turkey. We see that the Black Sea region has been an important route and line in the periods of the Genoese, the Ottoman Empire, the Roman Empire and the Hellenic world. We hope we will find clues in the work at the port. Parts of some ships are in really good condition. We have projects to make models of them and introduce them to our people," Yıldırım said.

Explaining that archaeological work consists of two steps, Yıldırım said that they have made a landscape plan of the acropolis and have found a Byzantine church, which they plan to unearth.

Yıldırım said that they would build a glass terrace for visitors and exhibit the findings to inform about the history of the city. These plans should be finished in two or three years.

Tium, situated in the coastal town of Filyos in Zonguldak, was established by a colony from the city of Miletus possibly under the leadership of a priest named Tios. Having been kept in the back of Heraclea Pontica (Ereğli district) and Amastris (Amastra district), the city has existed through many civilizations.

Excavations, which started in 2006, have been examined by foreign researchers and travelers since the second half of the 19th century.