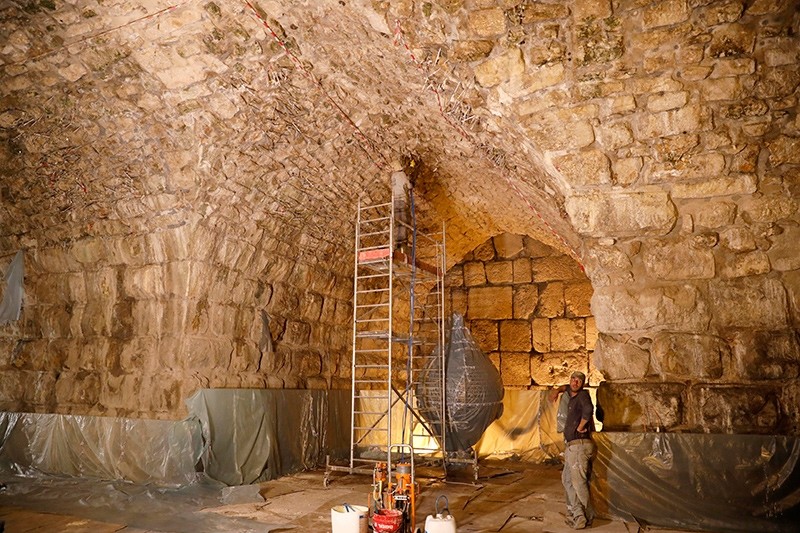 A small, half-built and roofed amphitheater from second-century Jerusalem has been unearthed during excavations below Judaism's Western Wall, the first such Roman-era find in the city, Israeli archaeologists said Monday.

The 200-seat carved stone structure was found underneath a passageway leading to the raised esplanade where an ancient Jewish temple stood until it was razed by the Romans as they put down a rebellion in 70 AD.

Archaeologist Joe Uziel said he and his colleagues knew the wall section was there and had expected to find a Roman street at its base.

"But as we excavated and excavated we realized we weren't getting to the street. Instead we have this circular building," he told reporters at the underground site.

"Basically we realized that we were excavating a theatre-like (Roman) structure."

He said that carbon-14 and other dating methods indicated it came from the second or third centuries AD and appeared to be unfinished.

The Israel Antiquities Authority (IAA), which conducted the two-year dig, said that historical sources mentioned such structures but in 150 years of modern archaeological research in the city none had been found.

The section of the 2,000-year-old Western Wall uncovered by the diggers is about 15 meters (yards) in width and 8 meters high, with the stones very well preserved.

The Western Wall is among the last remnants of the retaining structures which surrounded the second Jewish temple until its destruction by the Romans in 70 AD.

It is the holiest site where Jews are permitted to pray.

Previously, the last section to be exposed was in 2007, IAA chief Jerusalem architect Yuval Baruch said.

"It's probably the most important archaeological site in the country, the first public structure from the Roman period of Jerusalem," Baruch said.

"We know a lot about dwelling houses, a lot about installations, water systems, roads, streets but this is the first time we can present to the public a Roman public structure," he added.

The IAA statement said the building could have been a meeting chamber for Roman administrative officials or a concert venue, but said its location under an ancient arch which could have served as its roof gave a clue.

"This is a relatively small structure compared to known Roman theatres," it said.

"This fact, in addition to its location under a roofed space -- in this case under Wilson's Arch -- leads us to suggest that this is a theatre-like structure of the type known in the Roman world as an odeon."

"In most cases, such structures were used for acoustic performances. Alternatively, this may have been a structure known as a bouleuterion -- the building where the city council met," it said.

Wilson's Arch, named for 19th-century explorer and surveyor Charles Wilson, dates to the second temple period and served as a passageway for people entering the temple compound, the IAA says.

Uziel said that the archaeologists worked with care, mindful of the Jewish, Muslim and Christian worshippers nearby.

"We did not want to disturb any of the religious activities that were occurring in this area," he said.

In 1996, the opening of a tunnel adjacent to the latest finds sparked clashes between Israeli security forces and Palestinian police and civilians in which more than 80 people were killed.

The status of Jerusalem and its holy sites is among the most sensitive issues of the Israeli-Palestinian conflict.

Israel sees all of Jerusalem as its undivided capital, while the Palestinians view east Jerusalem as the capital of their future state.

Israel captured east Jerusalem in the 1967 Six-Day War and later annexed it in a move never recognized by the international community.