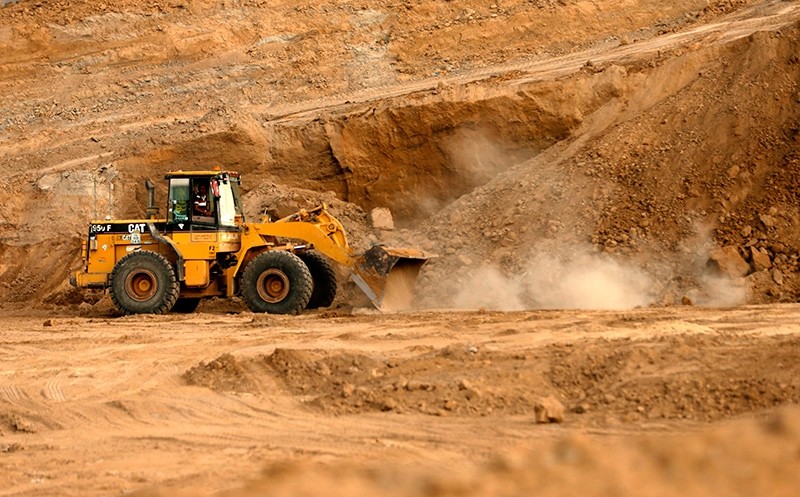 Archaeologists and preservation activists in the Gaza Strip have managed to halt the destruction of a Bronze Age site for now, but the future of what remains may still be in jeopardy.

Palestinian archaeologist Moain Sadeq says the mound at Tell es-Sakan near Gaza City is a "unique" site that could offer an invaluable glimpse into the region's ancient heritage.

It is "maybe the only fortified Canaanite city in southern Palestine" occupied continuously from 3200 to 2000 B.C., he says.

Since it was discovered by chance in 1998, the man-made mound has been scarred by bulldozers more than once.

A few weeks ago the earthmoving equipment returned yet again, destroying a large part of archaeological excavations carried out in 1999 and 2000 by Sadeq and his French colleague Pierre de Miroschedji.

The land was to be cleared for homes for public officials in the Palestinian territory ruled by the Hamas movement.

After a concerted effort by archaeologists, academics and those concerned with Gaza's heritage, the work was eventually halted.

But the activists are unsure how long the reprieve will last in a strip of land that has already seen its archaeological riches devastated by three wars with Israel, Palestinian infighting, overcrowding and indifference.

The latest attempt to build over the ancient mound was the third time the site has been threatened by bulldozers since 1998.

After that French and Palestinian experts moved in, but their dig was cut short in 2000 when the second Palestinian intifada, or uprising, against Israeli occupation drove them away.

Since then excavation work has remained frozen in time -- with any attempt to restart it complicated by a new housing project that has cut off the north of the site.

When the bulldozers recently returned, they devastated the excavation Sadeq and his colleagues had left as a work in progress.

"The damage is very, very significant. Ancient dwelling structures and sections of the ramparts have been destroyed. Moveable artifacts have been taken away," he said.

Tell es-Sakan, a 300-metre (984-foot) diameter expanse of sand in an arid landscape, does not catch the eye of the casual observer.

But archaeologists insist the site is of major interest, marking the shift from agricultural to urban society.

Beneath the surface is "a huge, very important site, with (the remains of) fortifications, houses," Sadeq said.

"It is a city -- not a small town, but a royal city, with a high level of organization, administrative and military structures."

The site is located at the mouth of Gaza's main watercourse, on the coastal route between Egypt and the ancient Canaanite region and beyond, to Syria and Mesopotamia.

The oldest finds are remains of Egyptian design of clay dwellings, ceramics, stone tools and fragments of pendants.

Pottery was found that could be linked to Narmer, Egypt's first king, whose seal has been located elsewhere in the Gaza Strip, indicating Gaza's close ties with its giant neighbor 1,000 years before the pyramids were built.

To most Gazans the spot is a weekend leisure destination, where children play in the sand and young men practice motocross.

They are vaguely aware of its historical significance, although no signs point it out.

Nevertheless it was Gaza's citizens who raised the alarm when the earthmovers rumbled in lately, said Jean-Baptiste Humbert, of the French biblical and Archaeological School in Jerusalem.

Locals posted on social media, drawing the attention of the Gaza archaeology authority, who in turn alerted their contacts outside the isolated strip, blockaded by Israel and Egypt.

His report and enlistment of supporters paid off, with the authorities behind the housing program agreeing to halt it, Jamal Abu Rida, general secretary of the Gaza archaeology authority, told Agence France-Presse.

The site, he said, is the authority's property.

"Nobody has the right to strip it," he said.

Disputes between archaeologists and housing planners are common in the densely populated coastal territory of Gaza, where Israeli bombing and artillery fire left tens of thousands homeless in 2014.

Humbert says that archaeologists on a dig are "like butterfly hunters" entranced by the history at their feet while Gaza housing officials have a totally different viewpoint.

"They look at us... saying, from the 2014 war there are thousands of people still to be relocated. What is more important?'"

"For them," he adds, the building plan "was a positive operation.".

"We have a housing crisis and high population growth. We are talking about 2.05 million people in Gaza now," said Amal Shmalee, a spokeswoman for the housing authority.

She said that nevertheless construction work at Tell es-Sakan had been halted and "we are going to stick" to that decision.

Archaeologist Sadeq, however, was not convinced that the pause in work would be for good.

"I'm not sure it will last forever," he said.