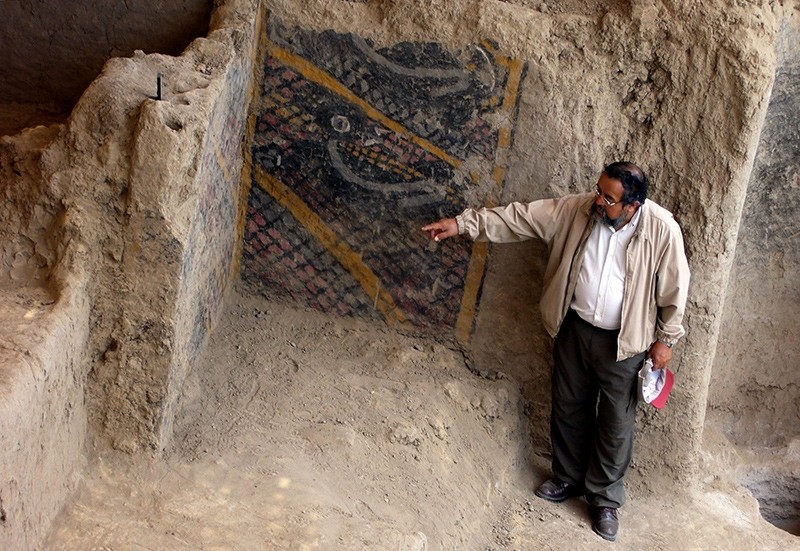 This handout file photo taken and released by Peruvian national news service Andina on Nov. 10, 2007 shows Peruvian archaeologist Walter Alva pointing what is supposed to be the most ancient mural painting in America (AFP Photo)
by Nov 13, 2017 12:00 am

A fire destroyed a 2,000-year-old mural and much of the vestiges of an archaeological site in northern Peru on Sunday, the director of the Tumbas Reales de Sipan Museum said.

"I have received the lamentable and tragic news of a fire that has destroyed the archaeological monument of Ventarron," museum head Walter Alva said in a statement.

The temple of Ventarron dates back 4,500 years and is considered the oldest discovered in the Americas.

The fire devastated the ancient mural as well as pottery vessels and records of the Ventarron Archaeological Comoplex in Pomalca, in the Lambayeque region, television images showed.

Workers from the Pomalca agribusiness company triggered the blaze when they ignited a sugarcane field.

"We are losing an exceptional monument unique to its generation," said Alva, who discovered the site in 2007. "I hope there is an investigation and responsibility established."

"I can only express my outrage and sadness for this irreparable loss."

Prosecutors have gone to the area to assess the liability of Pomalca administrators.