The cannon district: A clash of cultures in Istanbul's Tophane 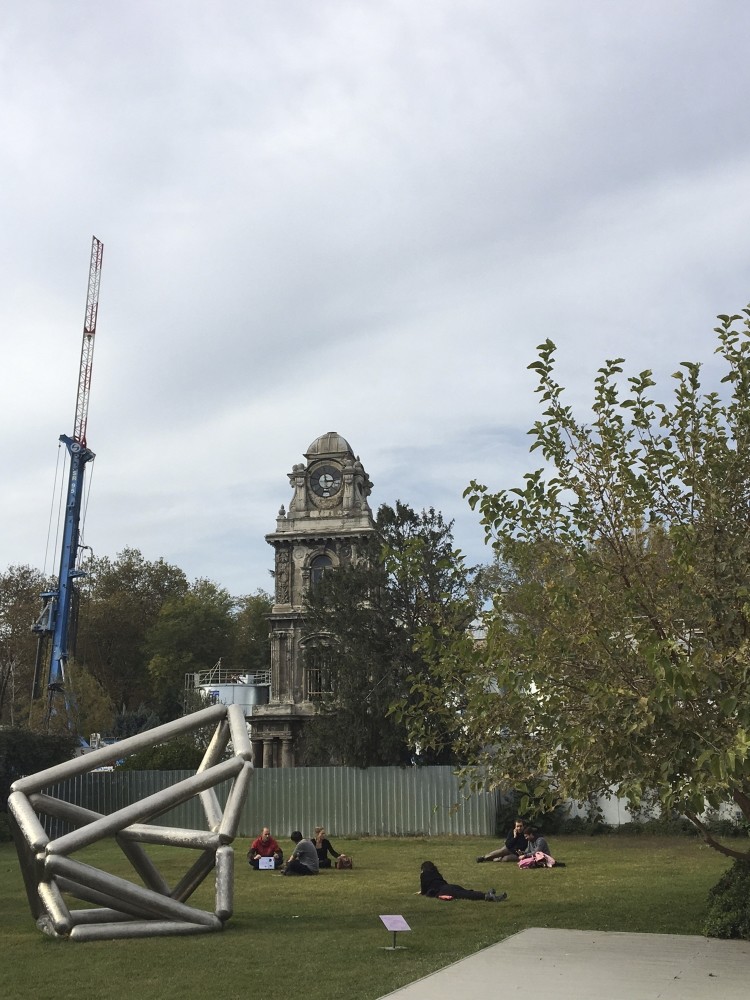 Tophane is as vivid a metaphor of Istanbul as any in a single neighborhood. Its name derives from Top Han, which translates from Turkish as ‘cannon house' after a 15th century foundry, currently the Tophane-i Amire Culture and Art Center, and inside its 19th century brick and mortar renovation, Mimar Sinan Fine Arts University now organizes exhibitions under its haunting industrial domes

On Aug. 5, 1716, a general in the imperial Austrian army was wounded in the first battle of the Austro-Turkish War in a place known as the Gibraltar of the Danube, now Petrovaradin in modern-day Serbia. He was a Frenchman named Claude Alexandre de Bonneval, and despite returning to the front to capture Belgrade, his luck soon ran out in Europe, where he was condemned to death, suffered a year in prison and faced banishment to Vienna for picking a fight with his superior in the Netherlands.

After his release he feared worse and quickly entered into the service of Ottoman sultan Mahmud I, converting to Islam with the name Kumbaracı Ahmed Pasha, a title of importance as he led the Turkish artillery to defeat Austria with the signing of the Treaty of Belgrade in 1739. As a military man, he had been effective on both sides, arguably contributing more to Ottoman imperialism than to the broken alliances of his European origins. 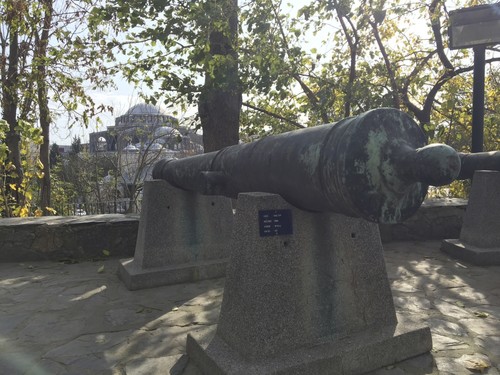 The premodern cannons outside the Tophane-i Amire Art and Culture Center recall a history all but lost to the imagination.

The name "Kumbaracı" is a transliteration of a Persian loanword into Turkish, referring to bomb manufacturers and those who fire explosive shells from mortars. Ahmed Pasha the Cannoneer, as Anglophones could say, conveniently resided on what is now a sloping street named after him, Kumbaracı, only a short walk from the foundry where he blasted the might of his vengeance against French-Austrian warhorses. He apparently had two apartments, one furnished in European style, the other to Ottoman tradition.

In 1744, at the age of 19, Venetian traveler Giacomo Casanova sailed to Constantinople, first setting his sights on the Venetian Palace in Pera before retiring to the Prince Islands to evade the July heat. As a foreigner, he was advised to have a bodyguard despite news of Ottoman peace treaties with Russia and Austria, which told him otherwise. Still, he did not take his chances the day following his disembarkation. Safeguarded by a janissary, he walked under the resplendent rococo square roof of the Tophane Fountain, built only 12 years before. Besides glorifying the newly enthroned Mahmud I, it offered drinking water to him and his fellow travelers, as well as the ritual wash for Muslims praying at the Kılıç Ali Pasha Complex mosque, where it was rumored among the literate that Miguel de Cervantes himself worked there as a slave.

Casanova soon entered the ground floor apartment on Kumbaracı that Ahmed Pasha kept in the French fashion. They became fast friends, relishing in the company of Neapolitan slaves who performed pantomime and Calabrian dances. They went out to experience 18th century nightlife at the residence of an Ottoman elite who whispered into the ear of his eunuch before a woman in a black velvet mask sauntered in to display her talent for the most violent of Venetian national dances, the "forlana." As he wrote in his memoir, "Story of My Life," she was better than anyone he had ever seen back home. In quieter moments, Ahmed Pasha asked Casanova if he knew of a certain woman devoted to the Roman Catholic Church, his mother. 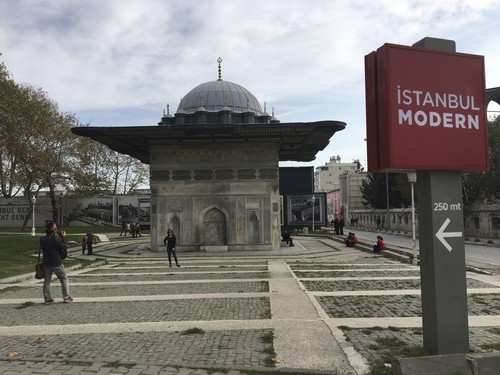 The Tophane Fountain is an iconic fixture in the neighborhood cityscape, built to honor Sultan Mahmud I.

A generation later, a European artist who would become famous as the unrivaled Bosporus painter left home in pre-modern German territory at 19 years of age, bound for Constantinople. He was Antoine Ignace Melling, a name that continues to echo down the halls of the Turkish imagination, as in Orhan Pamuk's Istanbul: Memories and the City. With his skill for drawing dignitaries throughout Italy and Egypt already under his belt, he impressed Hatice Sultan enough for her to persuade Sultan Selim III to employ him as Imperial Architect. He designed labyrinths and interiors for her palaces, as well as her clothes and jewelry.

In an oil and gauche on linen 72 centimeters wide and 92 tall, Melling painted his "Tophane fountain" before the structure's first major restoration in 1837. It stands among his other meticulous depictions of Tophane, often viewed from the water. The intricate detail revealed by Melling illuminates the subtleties not only engraved and painted onto the marble fountain, but of the neighborhood itself. The age of transition loomed before Ottoman rule began to trend to the West by the early 19th century. Barrel-heaving porters hunch over beside an opulently dressed, bearded man fingering his prayer beads while merchants converse around heaping watermelons patiently awaiting the passage of a janissary column.

One of the earliest manifestations of the aesthetic and cultural shift in Ottoman life cropped up between 1823 and 1826 in Tophane with the building of Nusretiye Mosque, a spectacularly distinct architectural innovation for the cityscape of Istanbul designed by Krikor Balyan, from the Armenian family whose visions were central to the imperial family's move from Topkapı to Dolmabahçe, signifying the European influences that remain dominant. Its synthesis of baroque motifs into an Islamic place of worship is eye-catching at first, and perpetually intriguing as the aesthetic blend evokes the inborn fantasies of historic time in direct relation to late imperialism.

Along with the Nusretiye Mosque, an iconic landmark in the pre-modern neighborhood cityscape is the Tophane Clock Tower, said to be the oldest of its kind in Istanbul, surviving urban renewal projects in the 1950s, about a century after it was built. Surrounded on all sides by overhauled, multiform construction efforts promising its restoration since 2010, it is decrepit, appearing in a state of near-collapse beside art lovers who picnic in the outdoor sculpture garden of Turkey's premier contemporary art museum, Istanbul Modern, which formerly housed the Feshane, a 19th century textile manufacturing plant.

Much of what was the glory of Tophane is off-limits to the public within the cordoned off customs warehouse at Istanbul Port, which came into effect from 1957-1958. It was part of a long process of industrializing the port, beginning in the last two decades of the 19th century as more piers were built, eventually accommodating depots and hangars before sowing the seeds for the Turkish Maritime Administration to form in 1984.

Most recent Tophane renewal developments revolve around the Galataport project, first proposed in 1995, and begun in March only to cease operations a month later to avoid demolishing cultural assets. Its 1.2 billion dollars invested seeks to revitalize Tophane Square into nearly 30 acres of parkland by returning the industrial, privatized space to the public. If the project reaches its initial completion date for the end of 2018, the 60,000 square meters of the old Karaköy-Tophane shoreline will reopen the historic neighborhood with seaside boulevards, walking paths and waterfront gardens to give Istanbul Port back to the people who made it the central docking point for ships arriving to Istanbul from Europe since the 17th century, and for the Genoese four centuries earlier.

Kumbaracı is notably the main drag in Tophane, as it reflects both the cultural history and the greater contemporary about the neighborhood with its lucid contradictions. Its extraordinary multiculturalism is visible midway up the sloping street in the shadow of the Crimean Church and an adjacent mosque where cross and crescent rise together over the red graffiti "This is Tophane." Only a few paces uphill, weekenders stroll nonchalantly to the vegan restaurants, art galleries, artisan workshops and vintage clothiers advancing on all sides from İstiklal to Galata, Karaköy to Cihangir.