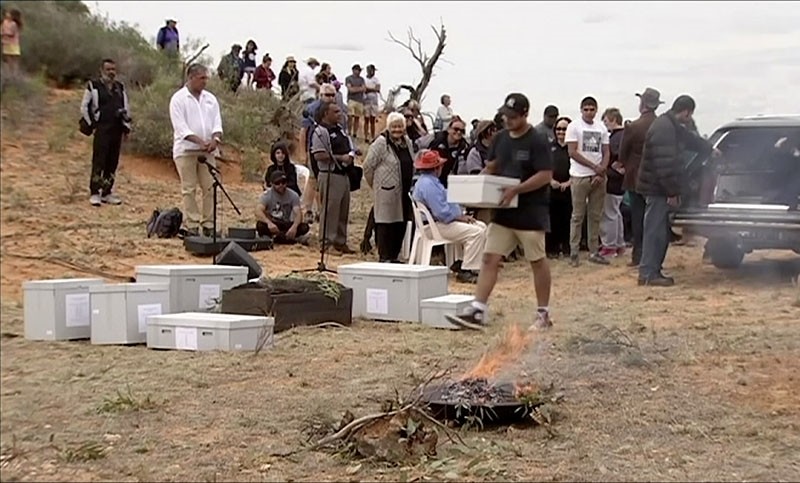 In this image made from video, the oldest human remains in a coffin are placed on the ground for a traditional ceremony in Lake Mungo, Australia, Friday, Nov. 17, 2017. (AP Photo)
by Associated Press
Nov 17, 2017 12:00 am

The oldest human remains found in Australia were on Friday returned to the Outback desert that he roamed some 42,000 years ago in a ceremony celebrated by traditional owners.

The ice age Aborigine was dubbed Mungo Man after the dry salt Lake Mungo where he was found in 1974 in remote New South Wales state 750 kilometers (470 miles) west of Sydney.

He was studied in the national capital Canberra at the Australian National University, which handed him back to traditional owners two years ago and formally apologized for the pain caused by his removal.

Local Aborigines burnt eucalypt leaves in a traditional smoking ceremony to welcome the black hearse that carried his remains in a coffin.

An Ngiyampaa tribal elder, who identified herself as Aunty Joan, told reporters: "I'm so glad he is back, to put him in his resting place."

"His spirit will be relieved and then he will be released when we put him back in the ground to his place where he came from," said Aunty Patsy, an elder of the Mutthi Mutthi tribe.

State Heritage Minister Gabrielle Upton said indigenous people had been instrumental in bringing Mungo Man back to where he was laid to rest around 42,000 years ago with his hands crossed over his groin and his body sprinkled with ochre.