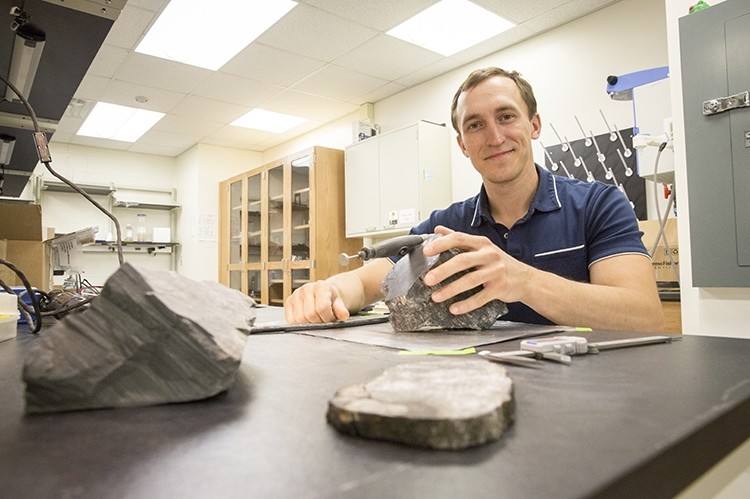 Erik Gulbranson, paleoecologist and visiting assistant professor at UWM, studies some of the fossilized trees he brought back from Antarctica. (UWM Photo/Troye Fox)
by Daily Sabah Nov 17, 2017 12:00 am

Erik Gulbranson and John Isbell from the University of Wisconsin-Milwaukee (UWM) made the discovery in the frozen continents' Transantarctic Mountains. By the end of their trip the scientists were able to find fossilized parts of 13 trees.

The discovery indicates that Antarctica was covered in lush forest, when it was a part of supercontinent Gondwana that spanned the whole of the Southern Hemisphere. Experts believe that greenery could be found at the end of the Permian Period, which is the time before first dinosaurs.

"People have known about the fossils in Antarctica since the 1910-12 Robert Falcon Scott expedition. However, most of Antarctica is still unexplored. Sometimes, you might be the first person to ever climb a particular mountain," Gulbranson said.

He added that the trees were a very "hearty" species and the research team is currently trying to determine the reason behind their extinction nearly 260 million years ago.

"This forest is a glimpse of life before the extinction, which can help us understand what caused the event," he said.

According to the geologist, plants that used to grow in Antarctica had to survive through the polar extremes of endless light and total darkness, which makes reasons of their extinction even more worthy of studying.

"There isn't anything like that today. These trees could turn their growing cycles on and off like a light switch. We know the winter shutoff happened right away, but we don't know how active they were during the summertime and if they could force themselves into dormancy while it was still light out," Gulbranson said.

He will travel back to Antarctica in the end of November and will stay there until January, hoping to learn more about the extinction of forests in Antarctica.