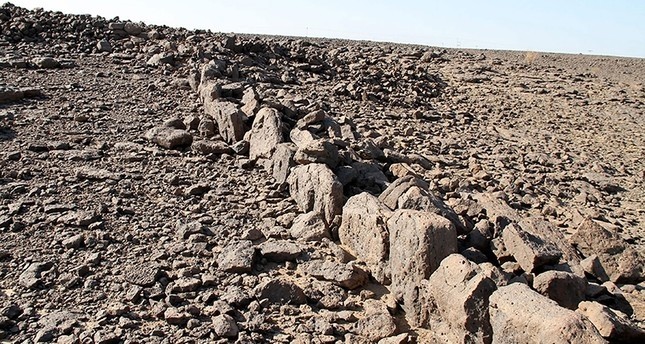 This undated handout picture released by the University of Western Australia shows the mysterious ancient structures built from stone in undisclosed locations across the desert in Saudi Arabia. (AFP Photo)
by Daily Sabah Nov 19, 2017 12:00 am

After identifying nearly 400 stone "gates" in Saudi Arabia's desert last month, Dr. David Kennedy got his chance at an aerial close-up look at the ancient mysteries.

Kennedy, who recently retired from the University of Western Australia, has spent the last decade studying the man-made structures on his computer screen, waiting for a long-sought invitation from the Saudi government to view the designs firsthand.

Recent Google Earth satellite imagery enabled his team of archeologists to get a better look at the burial sites, which Kennedy estimates were constructed by nomadic tribes between 2,000 to 9,000 years ago.

After announcing the team's discovery last month, Kennedy was invited by Saudi Arabia for a three-day visit to survey the desert site from a helicopter.

"They are absolutely astonishing," Kennedy told The New York Times. "From 500 feet, you can see the vital details of structures that are invisible in the fuzzy image on Google Earth."

The @UniOfOxford's David Kennedy has discovered hundreds of mysterious structures on ancient lava domes in #SaudiArabia. These so-called Gates may be up to or more than 9,000 years old. Check out the very first photos! #Archaeology @SctaSa @LiveScience https://t.co/oUi3SeFEHg pic.twitter.com/3jM3qu8AQt


Kennedy studied 40 of the 400 "gates" from the air, capturing more than 6,000 photographs. He also visited 200 other sites across the Harrat Khaybar and Harrat Uwayrid regions, observing formations in the shape of gates, triangles, kites and keyholes.

"We could see immediately they were much more complicated than they appeared on Google Earth," said Kennedy, adding that the structures were clearly not random.

Viewed up close, each stone line actually included two parallel slabs standing on their edges, facing each other with the gap filled in with small stones.

"They are much more sophisticated than I was prepared for," Kennedy said.

Kennedy suspects the structures may have been used for agriculture, some of which measured more than 300 meters long and 76 meters wide.

The "kite" formations Kennedy viewed may have been used to corral gazelle, trapping them for hunting.

"Essentially there was no escape," he said of the maze-like structures.

"Keyhole" structures, some lined up together, may have been used in funerals or for symbolic purposes, Kennedy surmised, saying in-depth analysis would be necessary to determine their historical uses.

"It's absolutely vital that somebody follows up with serious groundwork," said Kennedy.