Supported by the Tekfen Foundation, the book "Ziyaret Tepe: Exploring the Anatolian frontier of the Assyrian Empire," which contains information, findings and images of the excavation completed in 2014, was introduced in English at the Oxford Cambridge Club in London recently.

Many guests from academia and media attended the event for the Turkish version of the book, which was published in March. Tekfen Foundation board member Dori Kiss Kalafat told Anadolu Agency (AA) that she was happy to introduce the book in London. 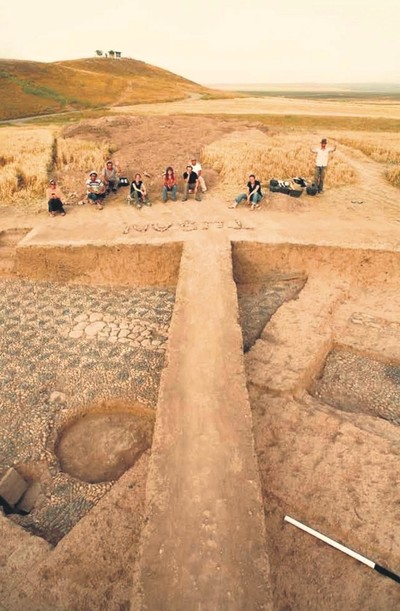 The excavation at Ziyaret Tepe, which is located in the village of Tepe near Diyarbakır province's Bismil district, has been conducted with the participation of American, European and Turkish experts from different fields.

Explaining that the book was the result of 18 years of work, Kalafat said, "Actually, this was a rescue excavation because of the Ilısu Dam. After the excavation had been completed, it was adapted into a book. Ziyaret Tepe was both the ancient city of Tushan in the Assyrian Empire and also an archaeological diary. The book shows who worked on this excavation and how the process was realized."

Describing it as an "area book," Kalafat said that the book draws the attention of archaeology students at universities around the world.

The head of the excavation, Professor Timothy Matney said that the book is an easy read.

"This project is the story of our findings along with how we excavated the area. We wanted to present the aspects of our ordinary life, which aren't normally written down, in the excavation area," Matney said.

Story of the Assyrian Empire

The excavation at Ziyaret Tepe, which is located in the village of Tepe near Diyarbakır province's Bismil district, was conducted with the participation of American, European and Turkish experts from different fields.

Dr. John MacGinnis from Cambridge University, Dirk Wicke from Frankfurt University and Professor Kemalettin Köroğlu from Marmara University were among the writers of the book along with Matney.

The excavation traces the process from the expansion of the Assyrian Empire in the ninth century B.C. to its downfall.

A clay tablet written in cuneiform of the language spoken 2,500 years ago was also unearthed and described as extraordinary. Sixty female names that don't belong to any known language are written on the tablet.