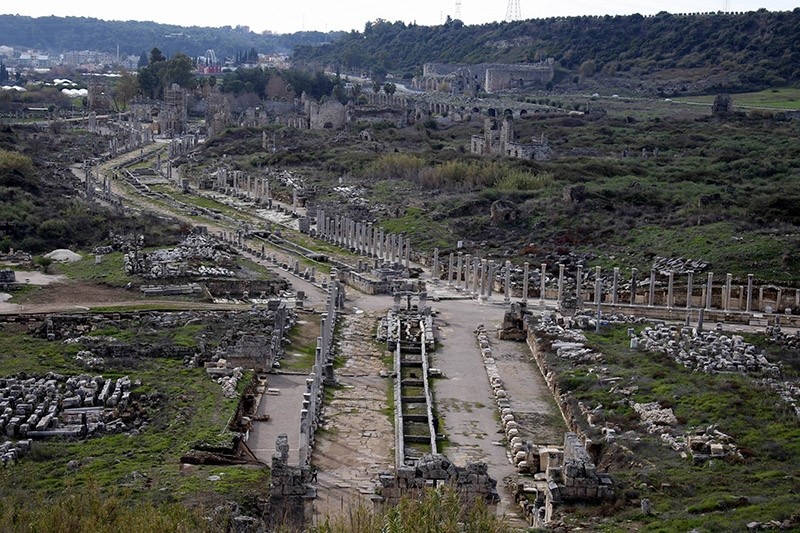 Around 70 percent of the 5,000-year-old ancient city of Perga in Turkey's southern Antalya province remains underground to be discovered, as archaeologists continue excavations to reveal its hidden beauties.

Located in Antalya's Aksu district, Perga is recognized as one of the most significant ancient cities in the world and is also the home of prominent ancient sculptors.

Since 2012, Antalya Museum has been carrying out the excavations, Demirel said, adding that they are also working to ensure visitors get a better grasp of the ancient city.

"Archaeological excavations take a long time and take place under the framework of a specific plan," Demirel said, adding that 30 percent of the city has been excavated until now.

To its east lies the Cestrus River, which has an acropolis from the Hellenistic period, and artifacts from the Bronze Ages, Roman and Byzantine empires.

"A large portion of the city is still under the ground but excavation works continue in an organized manner," Demirel said.

In the near future, archaeologists aim to restore two towers, a theater, a stadium and ensure water flow on ancient fountains through the tunnels. In particular, the towers are expected to be restored by 2019.

Demirel also noted that the ministry of culture and tourism has also completed landscaping work to welcome local and foreign tourists.

Artifacts discovered during excavations include different structures and quaint architectural styles, Demirel said, adding that it is crucial for excavations to take place simultaneously with restorations because the lack of one leaves artifacts without protection and prone to destruction.

These artifacts, including statues from the second and third centuries B.C., are currently being exhibited in the museum, the director added.

Archaeological excavations have been taking place in Perga since 1946.

The sarcophagus of ancient Greek divine hero Heracles was also discovered here and was recovered from the Geneva-based Phoenix Ancient Art Gallery years after it was smuggled.