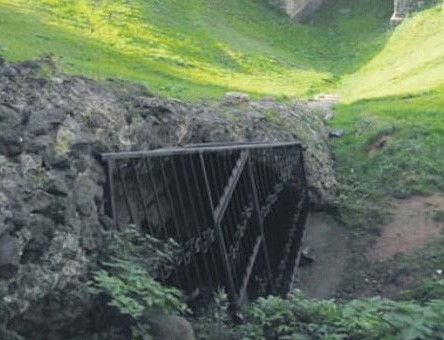 The area where the ancient underground city was discovered in Turkey's Trabzon province is pictured in this undated photo (Sabah Photo)
by Daily Sabah Jan 01, 2018 12:00 am

Thought to belong to the Komnenos dynasty of Byzantine emperors, the underground city was found in a tunnel in Ortahisar district by construction workers in a project led by Trabzon Municipality and the Housing Development Administration of Turkey (TOKİ).

The transformation project was immediately suspended after the discovery, Sabah daily reported.

Provincial Culture and Tourism Director Ali Ayvazoğlu noted that Trabzon is historically known as the "city of tunnels."

Ayvazoğlu added that the underground city is expected to be unearthed and will attract visitors to the area.

The Komnenos dynasty ruled the Byzantine Empire from 1081 to 1185 and is a prominent family whose name expanded after intermarriages with other Byzantine noble families, including the Angeloi, Palaiologoi and Doukai.