Research revealed that the bridge, the building material of which is cut stone with three different colors of black, red and gray hasnu2019t been demolished by natural events although it has been used for ages.
by Anadolu Agency Jan 02, 2018 12:00 am

Built during the era of the Ilkhanid Dynasty, the Çobandede Bridge in Erzurum province has been standing for 720 years, despite natural disasters

The historical Çobandede Bridge, which was constructed during the Ilkhanate Empire in Köprüköy district of Erzurum province, defies the years, remaining standing for 720 years.

Having been constructed over the Aras River by Vizier Salduzlu Emir Çoban Noyan between 1297 and 1298 during the reign of Ilkhanate Ruler Gazan Khan, Çobandede Bridge has survived through the times.

The bridge is near the Erzurum-Kars railway, which was opened to traffic by Turkish State Railways after being completed between 1939 and 1951, and the E-80 highway. The 220-meter-long and 8.5-meter-wide bridge is an important historical work for the city with its seven arches. 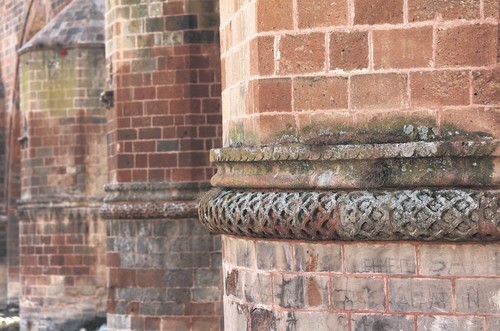 Searches have revealed that the bridge, which is built from cut stone in three different colors - black, red and gray - has not been corroded by natural events although it has been used for centuries and was constructed on a swamp, as junipers were put under the abutments of the bridge along with its architectural features.

It is also shown that space was left between the baffle walls of the bridge in order to decrease its the weight.

The part that is located on the big abutment in the middle of the bridge was visited by sheltered guards, postmen and passengers in the past.

Erzurum Provincial Director of Culture and Tourism Cemal Almaz said the historical bridge served as a passage to many camel trains and reflected history without being demolished.

Noting the bridge was restored some time ago, Almaz added, "Erzurum is a trade center and Çobandede Bridge is an architectural wonder. These regions were a part of a series of trade routes until they lost their significance during the Seljuk and Ottoman period. Erzurum is the only place where four important trade routes meet."

Strategical bridge for trade and wars

Implying that Çobandede Bridge was also strategical for wars along with trade in the past, Almaz said, "Armies used this bridge, which is really solid. The abutments of the bridge are made of junipers to prevent it from going down in the swamp. Arches were also constructed on the abutments to decrease the stream of water." He lastly mentioned that the historical bridge, which attracts attention with its appearance, was restored in 1727, 1872 and 1948, and the last restoration was six years ago.