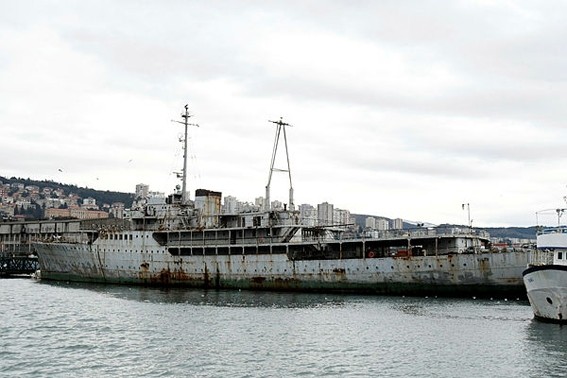 Once a stage for geopolitical deal making and host to the 20th century's most glamorous stars, the now dilapidated yacht of late Yugoslavian leader Josip Broz Tito is set for a new life as a museum.

Galeb (Seagull in Croatian) was in its heyday an icon of Yugoslavia, carrying the charismatic communist president on business around the globe and counting Elizabeth Taylor, Sophia Loren and dozens of heads of state among its guests.

After Tito's death in 1980, his yacht declined in tandem with his rudderless country, and the Galeb was left to rot as the federation collapsed in a series of bloody wars.

Now Croatia's northern port city of Rijeka, which bought the boat nearly a decade ago, plans to transform the Galeb into the star feature of its stint as European Capital of Culture in 2020.

"A ship with such a history can be an extraordinary attraction," Rijeka's Mayor Vojko Obersnel told Agence France-Presse (AFP).

The mayor has come under fire for the project in Croatia, where Tito is much more controversial than in other former Yugoslavian republics.

In September, the capital Zagreb stripped the late leader's name from a prominent square.

While admirers praise Tito's role in defeating the Nazis and raising the global profile of Yugoslavia, opponents slam his communist rule and personality cult.

Croatian conservatives, increasingly hardline in recent years, are keen to downplay Tito's legacy, which they link to Belgrade's domination of the former Yugoslavian federation that Croatia battled to leave in the 1990s.

"The idea of the ship is not to glorify Tito non-critically," said Obersnel of the center-left Social Democrats.

The aim is rather "to talk about the history around Yugoslavia and Croatia" and tell the tale of the boat's "very turbulent" past, the mayor said.

Built in 1938 in Genoa, Italy, to transport bananas from Africa, Galeb, then called Ramb III, was deployed in World War II by Italy and was torpedoed by British forces in 1941.

Repaired but later seized by German forces and turned into a minelayer, the ship was sunk by Allied bombing while in Rijeka in 1944.

The 117-meter boat was raised from the sea and became Tito's official yacht after the war.

The "Ship of Peace," as it was also known, first drew global attention in 1953 when it sailed Tito up the Thames in London to meet Winston Churchill, marking the first visit of a communist head of state to Britain.

Looking today at Galeb's rusting hulk, it is hard to imagine an era in which presidents, royalty and Hollywood stars trod its decks.

Dusty mid-century modern chairs lie scattered around the main salon, a bucket catches dripping water in one of the narrow corridors and some ceilings look close to crumbling.

Among the better preserved parts of the ship are the cabins of Tito and his wife Jovanka.

"All the furniture is original and we will try to keep it in its original state in order to present their life on the ship as genuinely as possible," Pavec said.

The city plans to spend 40 million kunas ($6.4 million) of EU funds on refurbishing the Galeb as a floating museum, with some quarters offered in concession for a hotel or restaurant.

Attention to renovation of legendary yacht

Tito ruled the former Yugoslavia from the end of WWII until he died. He made Yugoslavia one of the most prosperous communist countries, but political dissidents were jailed under his regime and opponents denounce his lavish lifestyle.

But on the anniversary of his death, thousands of his supporters still gather every year at his birthplace in northern Croatia.

The renovation of his yacht appears to meet largely with approval among the 130,000 or so residents of "Red Rijeka," as it is known for being traditionally on the left of the country's politics.

"But the younger generation, I don't know if they know enough about Tito to make a proper judgement."