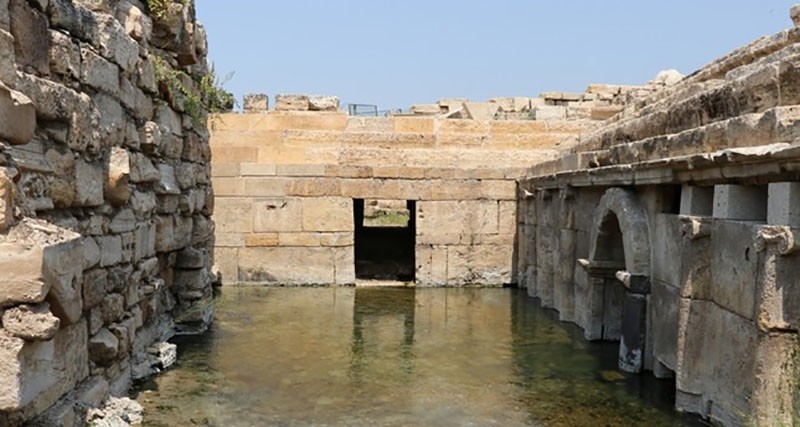 In ancient times, the Greeks and Romans believed this grotto was the gateway to hell. (Sabah File Photo)
by daily sabah Feb 20, 2018 12:00 am

The ancient Greek site known as "Gate to Hell," located in modern-day Turkey's western Denizli province, really did kill those who got too close – but instead of an angry god's breath, noxious gas claimed victims, scientists have found.

Legends of "Hades Gate," named after the Greek god of death, say anyone who approached the deadly breath-filled grotto dropped dead and was immediately taken away to the underworld – a tale considered hyperbole, until now.

A team of researchers from Germany's University of Duisburg-Essen who has been studying the site in the ancient city of Hierapolis uncovered a geomorphic explanation for the dramatic deaths.

The grotto sits directly above the Babadağ fault line, from which carbon dioxide escapes Earth's crust and fills the cave, at levels that may have been lethal to humans in ancient times.

​"In a grotto below the temple of Pluto, CO2 was found to be at deadly concentrations of up to 91 percent," the study, published in the journal Archaeological and Anthropological Sciences, said.

"Astonishingly, these vapors are still emitted in concentrations that nowadays kill insects, birds and mammals."

The fault line had another formative effect on the city, one that instead fought back against death's approach and kept it a popular spot for visitors. Colorful mineral hot springs cascade down the hill near the ruins of Hierapolis, the place known as Pamukkale in modern Turkey. The site has been used as a healing spa since the second century B.C. under the Greek Seleucid Empire.

Today's visitors to Pamukkale can enjoy walking through the bright turquoise pools and taking a swim in the therapeutic hot spring waters. The ruins of the city are also opens for visitors to explore, as well as the artifact-rich Hierapolis Archaeology Museum.