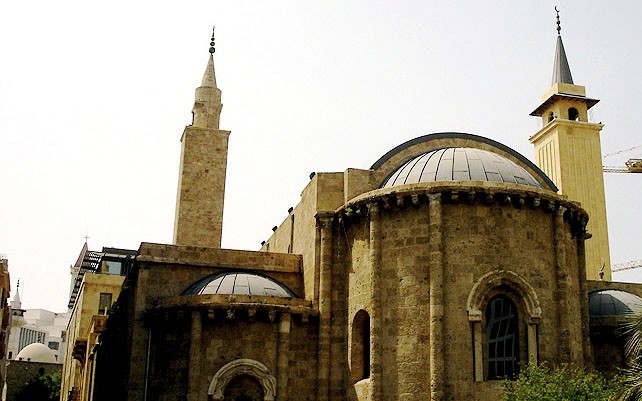 In the Lebanese capital Beirut, the Al-Omari Grand Mosque, named after the second Islamic caliph, Umar, has witnessed the city's history for centuries. Following the Muslim conquest of the city, the mosque was built on the ruins of a third century B.C. pagan temple, which was demolished in earthquakes.

It was named the al-Omari Grand Mosque because the city was conquered during Umar caliphate but it has also been called by different names at different times.

Under the Mamluks, it was called the "Islamic Conquest Mosque" since the Crusaders were expelled from the region while under the Ottomans it was called the "Yahya Mosque" because of its spiritual position and the sacred relic thought to belong to John the Baptist, prophet Yahya in Islam.

The sanctuary, one of the biggest in Beirut, continues to observe history in the middle of a lively and moving environment with bazaars.

A mosque from Mamluk period

Academic and imam at the Beydoun Mosque, Abraham al-Hut told Anadolu Agency (AA) that the sanctuary was turned into a church by the Crusaders before it was transformed back to a mosque by an-Nasir Salah ad-Din Yusuf ibn Ayyub in 1188. However, the Crusaders sacked the city after a while and the mosque again became a cathedral in 1199. It was finally turned into a mosque again in 1291 by Emir Sucai, on the orders of Mamluk Sultan al-Eshref Khalil. It has been used as a mosque since Hut said adding that a minaret was also added during this period.

Highlighting that fact the mosque wasn't forgotten in the Ottoman Era, Hut said the mosque's outer court was built in the period of governor Ahmad Pasha al-Jazzar in the 1770s. "In 1888, Abdulhamid II had officers construct an iron cage around the tomb of John the Baptist."

Restoration works at the mosque were carried out between 1949 and 1952, and a western style main entrance was built. Hut said the ornaments of the mosque were made by Ali al-Aris and there is a calligraphy plaque on the white marble facing the Qibla, the direction of Mecca, to which Muslims turn in prayer.

Hut said that the mosque had its own sacred relic, the strands of Muhammad. It was gifted to Muslims in Beirut by the Ottoman Sultans. He added that it was kept in a chest and was opened for visitors on the 26th day of the month in every Ramadan until the civil war in 1975, when it got lost. "Prayers weren't performed. The mosque suffered heavy damage and a series of thefts," said Hut.

After the civil war, Kuwait helped enlarge and restore the mosque, protecting its Islamic character. An area dating back to the Mamluks and Ayyubids was also discovered under the mosque during the restorations.