Tiny mummy discovered in Atacama Desert was girl with bone disease, not an alien: study 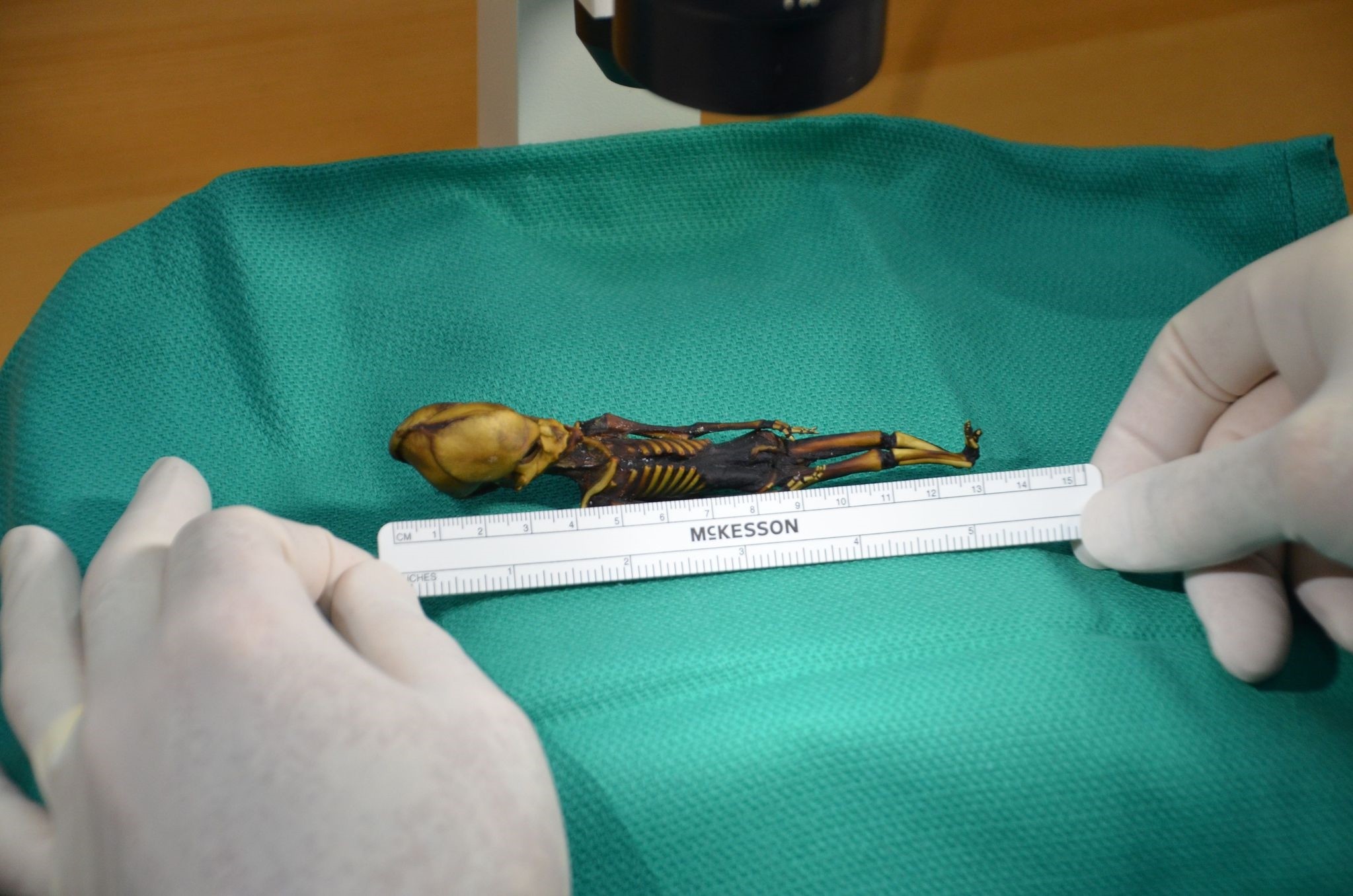 This undated image courtesy of Dr. Emery Smith show a tiny, mummified skeleton discovery in 2003 in Chile's Atacama Desert, tucked into a leather pouch behind a church. (AFP Photo)
by Mar 23, 2018 12:00 am

The discovery in 2003 sparked international intrigue - a tiny, mummified skeleton with an alien-like head, tucked into a leather pouch found behind a church in the Atacama desert of Chile.

The notion that it was an extra-terrestrial was long ago debunked, but researchers said on Thursday(March 22) they have gleaned new insights from a full genetic analysis of the skeleton, nicknamed "Ata".

It belonged to an infant girl with a handful of rare gene mutations linked to dwarfism, deformities and apparent premature aging, said the study in Genome Research.

Experts have said previously the bones appeared to belong to someone between the ages of six and eight, but this advanced wear on the bones was likely a consequence of the child's deformities, not a reflection of her actual age.

In fact, the study said she likely didn't live long, and may have been born premature.

"Given the size of the specimen and the severity of the mutations... it seems likely the specimen was a pre-term birth," said the study.

Nor is the skeleton ancient, as some had hypothesized.

Researchers now say the skeleton - which is incredibly intact - is probably no more than 40 years old.

Using DNA extracted from the bone marrow, researchers did a whole-genome analysis which determined that she was South American, "with genetic variations that identified her as being from the Andean region inhabited by the Chilean Chilote Indians," said the report.

The child had a never-before seen rib count of 10 pairs. Humans typically have 12 pairs.

Senior author Garry Nolan, professor of microbiology and immunology at the Stanford University School of Medicine, said "a relatively short list of mutations in genes known previously to be associated with bone development" were found in genes related to dwarfism, scoliosis, and musculoskeletal abnormalities.

Some were previously known to scientists, others were not.

Just how the child came to have these genetic flaws is still a mystery, but researchers suggested contamination from a nearby mine could be to blame.

"While we can only speculate as to the cause for multiple mutations in Ata's genome, the specimen was found in La Noria, one of the Atacama Desert's many abandoned nitrate mining towns, which suggests a possible role for prenatal nitrate exposure leading to DNA damage," said the study.

Nolan said the discovery could one day lead to treatments for people with bone problems.

"Maybe there's a way to accelerate bone growth in people who need it, people who have bad breaks," he said.

"Nothing like this had been seen before. Certainly, nobody had looked into the genetics of it." For now, though, he urged the skeleton - which is owned by a Spanish archeological collector - to be returned to Chile.

"I think it should be returned to the country of origin and buried according to the customs of the local people."