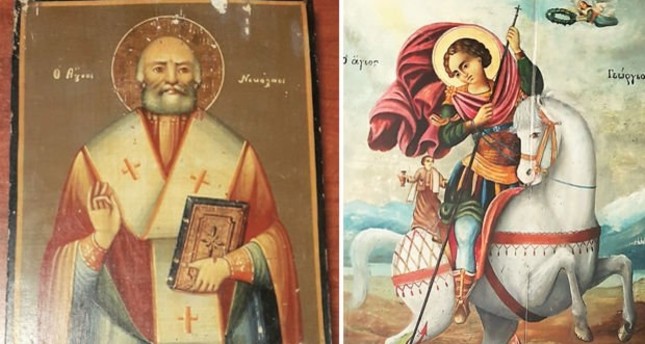 According to reports, the suspects were captured after the Customs and Trade Ministry was warned about the illegal transaction and found out that the icons would be sold at a shop in Istanbul's Beşiktaş district.

After examining the icons, experts found that two of them were from the 19th century and depicted St. Nicholas and St. George.

One of the icons was reportedly fake, Habertürk daily reported.

The suspect identified as E.I. claimed that she owned the icons and did not intend to sell them. She reportedly said that she was planning to entrust the icons to her friend so that they would not be damaged as she moved house.

The culture ministry's approval is necessary for the possession, transfer or sale of historical artifacts under the scope of the Code of Protection of Cultural and Natural Properties.

The artifacts were reportedly handed to the Hagia Sophia Museum Directorate for protection.

Thousands of anti-smuggling operations are carried out across Turkey every year to prevent the illegal sale of historical objects and to protect the country's rich cultural heritage.

Share on Facebook Share on Twitter
Previous in History A 1,700-year-old sarcophagus dating back to the Roman era was seized... Next in History Prepared as part of the 150th establishment anniversary of Galatasaray...
DAILY SABAH RECOMMENDS