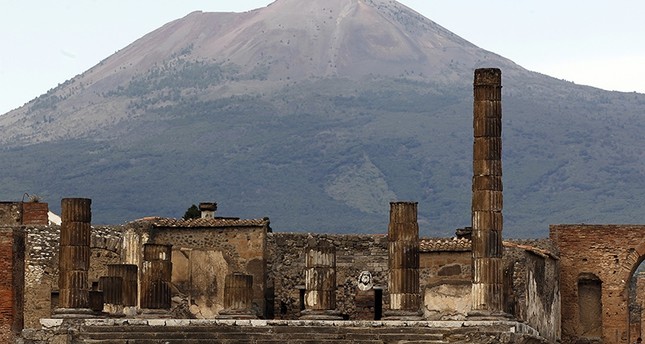 Mount Vesuvius looms over the ruins of Pompeii, destroyed by a volcanic eruption in A.D. 79. (Reuters Photo)

Archaeologists have found the skeleton of a child in the ancient city of Pompeii in southern Italy, the Archaeological Superintendence of Pompeii said Wednesday.

The skeleton belongs to a 7-to-9-year-old victim of Mount Vesuvius, a volcano that erupted in the year 79 AD, burying the city at its base in ash.

The skeleton was buried under a layer of ash about 10 centimeters thick, officials said, adding that the skull had been found first and further digging had unearthed the bones.

Millions of tourists visit the archaeological site each year.

Share on Facebook Share on Twitter
Previous in History Britain must permanently return all artifacts from Ethiopia held by... Next in History The Turkish Cooperation and Coordination Agency (TİKA) is going to...
DAILY SABAH RECOMMENDS