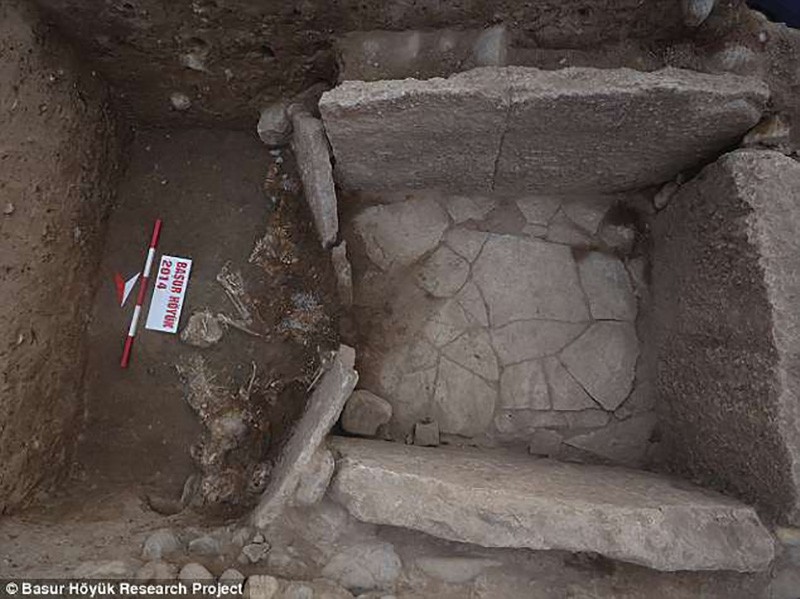 Excavation work at a Bronze Age burial site in southeast Turkey has unearthed the graves of several youth, in what archeologists believe may be the earliest child sacrifice site in the region.

In large, coffin-like tombs, the researchers identified the remains of 11 male and females ranging from age 11 to 20, including two 12-year-olds, and a young adult whose remains may have come from an earlier burial.

Sağlamtimur and Hassett believe the young people may have been sacrificed, due to evidence of sharp force trauma by stabbing or cutting on several skeletons and the horde of riches buried along with them. Textiles, beads, ceramics and hundreds of bronze spearheads were found in and around the tomb.

The sacrifices may have been "retainers," people chosen to accompany and serve the dead in the afterlife.

"The burials are remarkable because of the youth of the individuals, the number that were buried and the large wealth of objects that were buried with them," Hassett said. "Women and children in Mesopotamia were occasionally buried with grave goods, but they were normally personal belongings."

"It is unlikely that these children and young people were killed in a massacre or conflict. The careful positioning of the bodies and the evidence of violent death suggest that these burials fit the same pattern of human sacrifice seen at other sites in the region," Hassett said.

However, due to poor preservation of the burial chamber, Hassett and Sağlamtimur could only surmise the cause of death. They guessed some of the dead may have been killed by wounds to the fleshy parts of the body, which would not leave lasting marks on remains.

"As a grim example, stab wounds are normally aimed at the soft parts of the body, which do not preserve," Hassett said.

Başur Höyük contains the remains of people buried between 3100 and 2800 BCE. The site is believed to be 500 years older than the Royal Cemetery of Ur, the elaborate tombs where Mesopotamian rulers were laid to rest.

"Previously, the most well-known example of human sacrifice from this area is the monumental discovery of the Royal Cemetery of Ur, where hundreds of burials were identified as sacrifices," Hassett said, adding that the child graves at Başur Höyük resemble those of sacrifice sites at Ur.

Historians believe child sacrifice was used as a means of population control as ancient societies grew larger and more complex.

"It has been suggested that practicing human sacrifice was one of the ways that complex civilizations like the one that rose up in Mesopotamia consolidated their power," she explained.

"This discovery moves the investigation 500 years earlier and more than 500 miles to the north," Hassett added.

The history of the Near East region – including modern-day Iraq, parts of Turkey, Syria, Iran and Kuwait – begins from about 4,000 B.C. It is considered the cradle of western society.