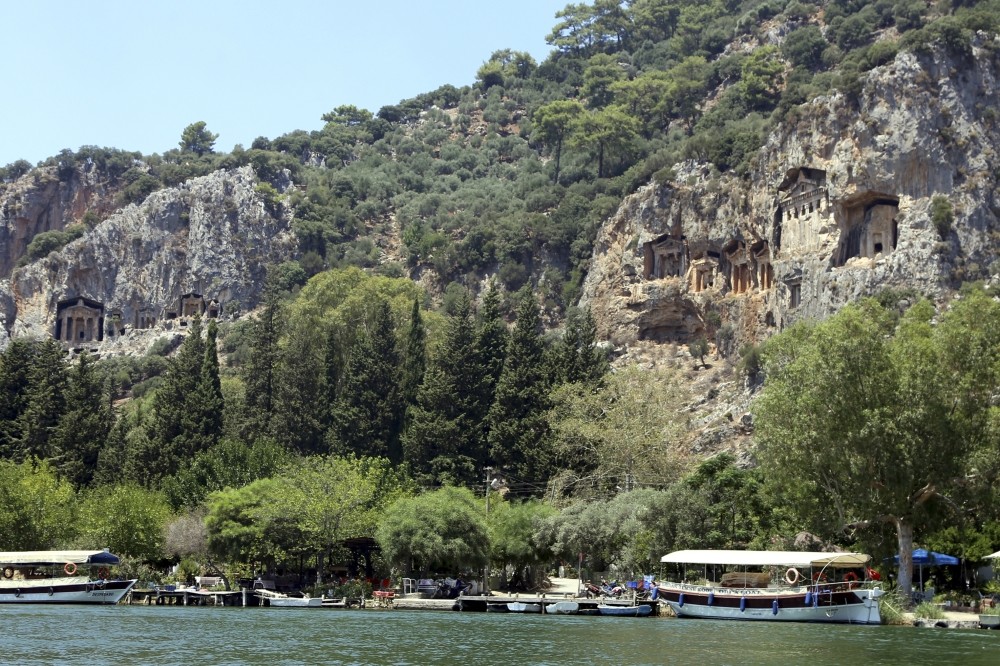 Caunos, the ancient port city built 3,000 years ago on the edge of the Dalyan Canal, is crowded with tourists who are there to see the antique salt ponds and ancient ruins

The 3,000-year-old ancient city of Caunos is on the Temporary List of UNESCO World Heritage Sites and offers 2,400 years of rock tombs, a 3,000-seat theater, a basilica, a Turkish Bath, an agora, the Demeter Sacred Temple and 1,300-year-old mosaics. It is a center of attraction for both domestic and foreign tourists.

Located in the Dalyan Quarter of Muğla's Ortaca district, Caunos can be reached by tour boats in 10 minutes. Visitors can open the doors of the ancient city after a walk of 15 minutes on the tree-lined road.

The excavations initiated by professor Baki Öğün in 1966 still continue under the chairmanship of professor Cengiz Işık.

The manager of the excavations, Işık noted that Caunos was founded by the twins of Miletos on the border of Karya-Lycia.

Işık said the city had settlements in archaic, classical, Hellenistic, Roman and Byzantine periods and was abandoned afterwards.

Highlighting the unique texture of the city, Işık said Caunos shines a light on the unknowns of archaeology. "Soon, due to the firsts Caunos offers to archaeology, it will hopefully be moved to the permanent list from UNESCO's 'World Heritage Nominee List.'"

Işık said in the last half century, there were many historical structures excavated at the city.

Noting that the city hosts hundreds of visitors a day, Işık said Caunos is not just important due to the value it added to archaeology but also with its environmental texture, fauna, flora and endemic structure.

City built based on wind direction

The measurement platform in Caunos points out that the streets of the city were founded according to the direction of the wind as revealed by ancient writers, as well as in an archaeological document revealed first in Caunos. 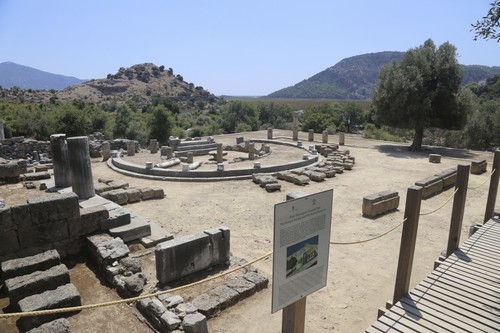 Işık highlighted the importance of the Demeter Sacred Temple in Caunos, saying that a holiday only celebrated by women took place there.

Emphasizing the importance of Caunos for commerce, Işık said it lost its port character due to the sea being filled with alluvium. "According to Herodotus, the father of history, Caunos locals were originally from Karia, but they thought they were from Crete. The geographer Strabon writes that there is a dockyard and a port of which the mouth can be blocked. The port of the city was the Sülüklü Lake below the acropolis. Then the sea reached up to the Caunos acropolis. After the Persians took over Anatolia, the city came under the administration of Mausolos. When Alexander the Great defeated the Persians in 334 B.C., the city came under the administration of Princess Island, then Antigonos and then, Ptolemaios. It then was under the domination of the Rhodes Kingdom, Bergama and Roman kingdoms. As the port was filled, it became less important," said Işık.

Rock tombs, witnesses of the past

The rock tombs welcoming visitors in Caunos are the silent witnesses of the past according to Işık.

"The rock tombs have a very original structure in terms of facade architecture. The rock tombs of Caunos were built in the form of a Hellenistic temple. This is a unique architectural touch. There is no other example like this," said Işık. 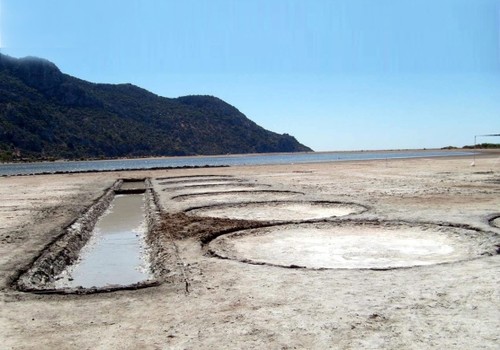 Salt basins were very important as salt was used in making eye pomad.

Kevin Meclayne, who was visiting from Bournemouth in England, said that Caunos as a historical remnant is very beautiful with unique works.

Noting that Caunos is a historical city, Meclayne said that the boat tours are spectacular in Dalyan Canal. "We will visit İztuzu Beach. I am really curious about the Carettas," added Meclayne.

John Sawyer from Cardiff in Wales has visited Muğla 14 times, yet it was his first visit to the ancient city of Caunos. "It's a wonderful city. We will definitely come again. We are glad to be here," said Sawyer.

Gökhan Kırmızı, a tour guide from Marmaris said that there are five daily tours to Dalyan and that most of their visitors are from England. "I guide them. Our customers are very satisfied. Dalyan is one of the most popular tours we sell. Dalyan Canal, the rock tombs, Caretta turtles and the ancient city of Caunos and the nature can all be seen," said Kırmızı.