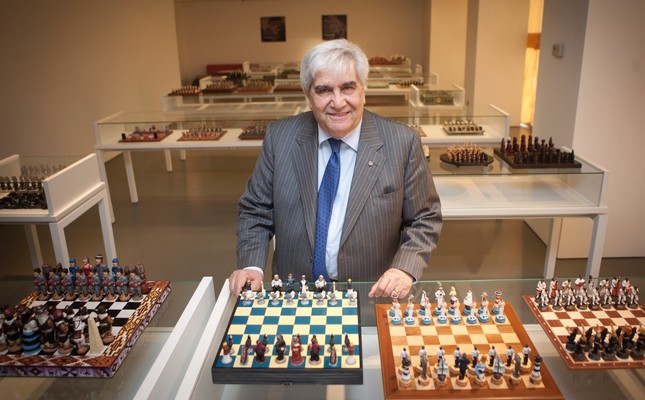 Akın Gökyay estalished the museum in 2015, to exhibit 686 chess sets collected from over 100 countries.

An extraordinary museum in the Turkish capital Ankara takes visitors on a long journey of chess through the ages.

Its curator is passionate about chess although he never thought he would one day have his own collection or museum. Akın Gökyay, 78, bought his first chess set for aesthetic reasons.

"During a trip abroad, I saw different chess sets in every country. These were chess sets reflecting the culture, tradition and social structure of their origin," Gökyay told Anadolu Agency (AA). Impressed by the variety of thematic chess sets across the world, Gökyay became a collector.

"When the number of chess sets reached nearly 700, my wife Birten said there was no point in keeping them behind closed doors," he said.

His wife suggested he should share his collection with the public and that became the first step towards the museum, which was given the title of the best museum of Ankara in 2017.

The museum was set up within an old house in Hamamonu, a restored area of the capital.

Stepping into the museum, you start your journey with Gökyay's very first chess set acquired from Italy in 1975.

It is accompanied by a 60-year-old set, the oldest of the collection.

Displayed under four themes, the sets speak of tales from Italy to Madagascar.

"We wanted the chess sets to bear some weight, visually, and tell a story when we chose them," Gökyay said.

The museum won a Guinness World Record in

2012 for the largest chess collection in the world.

Gökyay said a new trend is to represent cities on the chess set with their iconic buildings. His collection has symbols of buildings from London, Amsterdam, Rotterdam, Dallas and Milan. A set representing Ankara has the mausoleum of Turkey's founder Mustafa Kemal Atatürk and the spectacular Kocatepe Mosque.

If you're tired of the world tour, the museum offers a movie break with sets inspired by the Lord of the Rings and Star Wars.

For history lovers, there is a set representing world leaders, and another depicting the Battle of Gallipoli and the 9/11 attacks.

There is also one portraying the Smurfs, the iconic cartoon series.

Using different techniques and various materials such as wood, silver, gold, cast, fish bone, polyester and ceramics, the collection is a culmination of a 43-year-long adventure. Speaking about the sport, Gökyay said chess teaches one time-regulation. "Chess brings to you a more rational, more realistic and more successful lifestyle," he said.

Share on Facebook Share on Twitter
Previous in History The historical Germuş Church in southeastern Turkey's Şanlıurfa, which... Next in History Relics from a large-scale wine jug factory that dates back around...
DAILY SABAH RECOMMENDS