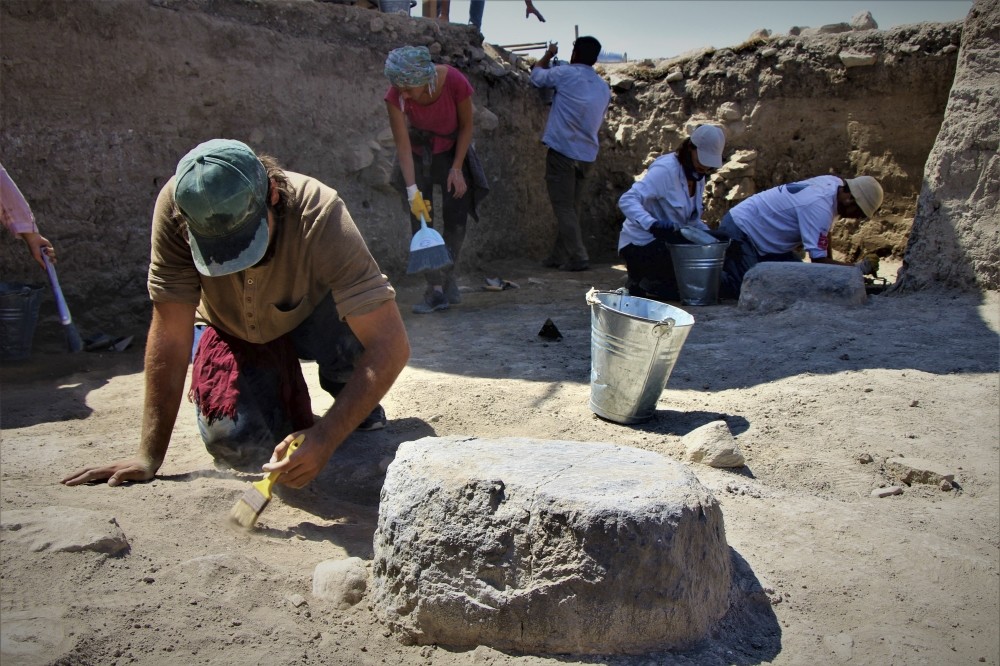 A reception chamber with columns and a throne chamber, which belong to a 2,500-year old Persian palace, were found during excavation at the Oluz Mound in the Göynücek district of Amasya province.

Amasya Governor Osman Varol visited the Oluz Mound to examine the excavations and to receive information about the technical and structural features of the excavation site. He announced that a new structure was discovered during the excavation.

Emphasizing that finding ruins belonging to a 2,500-year old Persian palace excited them, Varol said "We visited the excavation site and had a chance to see what has been found. This is long-running work. We would like to thank the professor and those who contributed to this. We saw how tough the conditions are here. We especially would like to thank the professor for his contributions to science and to Amasya."

Istanbul University Archaeology Department faculty member and professor, Dr. Şevket Dönmez, is leading the excavation works; he said that movable cultural material ruins showed that a group of Persian-origin Akhamenids might have lived at the Oluz Mound in the year 450 B.C. The mound is located at 25 kilometeters southwest of the Amasya city center.

Stressing that a Persian city was found during the excavation works this year, Dönmez said that "New units of this city have been revealed. We now know about a path, a mansion and a fire temple. All these are firsts in world history. A reception chamber with columns and a throne chamber have also started to emerge for the first time this year. We are in the beginning phase of the excavation work for these chambers. This current phase and discoveries are very exciting. These belong to a very significant period of the Anatolian Iron Age, Anatolian Old Age and Persian archaeology.

"They are very important discoveries which will add to their identity and uniqueness. We have found six column bases so far. A clear plan has not yet been revealed, but hopefully we will find it in one or two years of excavation works. We found a bull figurine belonging to the Hittite period this year during excavations. There is a very big Hittite city under the Persian city. We think that it is Shanovhitta. It shows us that

this is a traditional sacred city and every new civilization built a temple here.

"We did not know that we would find such a Persian city. Neither such a temple nor such a reception chamber… We did not expect any of this," added Dönmez.

Twelve academics, 10 archaeologists and 15 archaeology students worked on the excavation.

Dönmez said that they only expected to excavate a mid-Anatolian mound and find answers to their questions regarding the Iron Age culture. "However, we came across an entirely different situation. The entire world has started to watch Oluz Mound on the basis of Mid-Anatolian and Anatolian archaeology. I believe that it has started to become a significant center in updating and changing Anatolia's religious history after Göbeklitepe," added Dönmez.

Oluz Mound is located on the Amasya-Çorum Highway. Measuring 280 by 260 meters, it covers nearly 45-decares of land, and is 15 meters above the plain level. The area was discovered between the years of 1997-99 during surface exploration conducted by a team led by Dr. Şevket Dönmez (who was an associate professor at that time). Later, excavation started under the leadership of Prof. Dönmez in 2007. Works were conducted from two different openings, called "A opening" located on the West side and "B opening" on the East side of the highest point on the hill. Two more openings were added, called C and D openings.