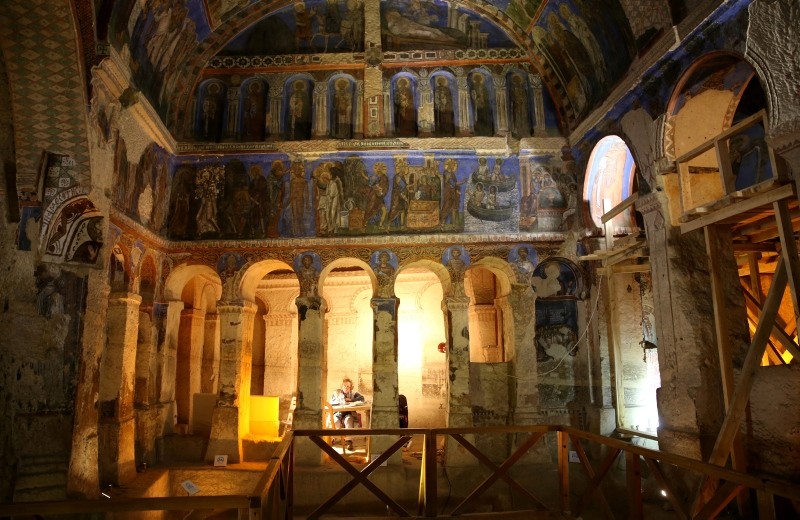 The Tokalı Church, one of the oldest rock-cut churches in Cappadocia featuring precious frescoes, is being restored by experts from Turkey's Ministry of Culture and Tourism and Italy's Tuscia University.

The joint project that has been in the works for four years aims to preserve the church that is home to dozens of precious frescoes from the early Middle Ages that are historically significant for Christians. The historic structure was included in UNESCO World Cultural Heritage List in 1985.

The project for the church, which was constructed in the early 10th century and regarded one of the important landmarks of Byzantine art, includes stabilizing the walls and vaults as well as touching up the frescoes with various chemicals and paints to preserve their originality.

"We found the need to restore the church because it is 1,000 years old," Manager of the Nevşehir Museum Murat Gülyaz told Anadolu Agency.

"Restorations began first on the northern wall, continued on the abscissas and will move on to the rest of the walls in the next few years. Cracks in the pigments and shedding of the paintings on the walls will also be repaired," he said.

Gülyaz said the church – which is divided into three parts – is unique because the richly-colored frescoes and paintings give a comprehensive account of the life of Jesus from his birth to his death.

The rock church is decorated with Jesus Christ's infancy, ministry and passion cycles and several episodes from the life of St. Basil of Caesarea, one of the most important saints of the Cappadocia region. One of the most common features of the church decorations is the depiction of Jesus in human form during Byzantine Cappadocia.

Maria Andaloro, head of the restoration project and professor of Middle Ages Art History at Tuscia University in Italy, said she was excited to restore the great church and will ensure that workers take all possible measures to protect the historical structure.

"There are very important paintings on the walls here. People come to Cappadocia from all over the world. Employees that are working on the Tokalı Church restoration have taken on a historic responsibility. Frescoes that were made 1,000 years ago are being touched up by us 1,000 years later. That is very important and exciting," she said.

Gülyaz said despite the church's good preservation, maintaining them is a challenge since even the visitors' breathing can cause deterioration.

Because of the high number of visitors to the church, photography has been banned, Gülyaz said.

"Taking photos is prohibited here since ultraviolet rays from the flash harm the pigments in the mural paintings," he said.

Andaloro's restoration team is highly experienced, having previously worked on historical and culturally significant buildings in Jordan, Lebanon and Afghanistan.

More than 1 million people visit Turkey's stunning Cappadocia region ever year. The region is often described as a must-see travel destination, with its volcanic landscape and unique scenery featuring slick rocks with lush, green tracks, caves, tunnels and canyons waiting to be discovered.