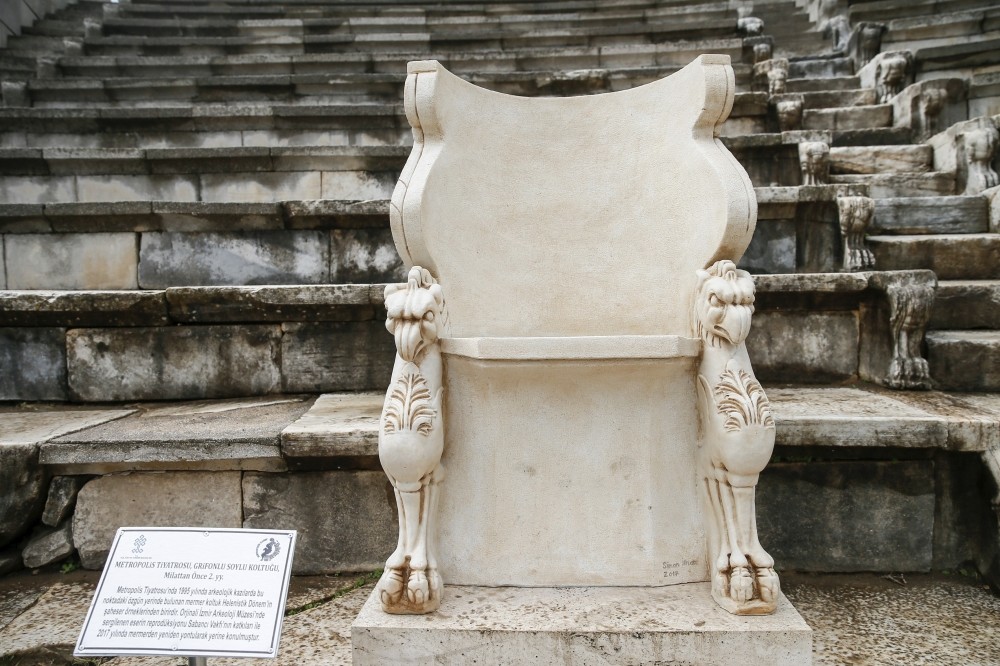 A replica of the gryphon noble chair belonging to the aristocrats of the time was placed at the metropolis excavation area in İzmir, Torbalı where it used to stand 2,000 years ago.

The metropolis in İzmir dates back to 2,500 years, while the gryphon noble chair was discovered in 1995 and the mold of the original artwork was re-carved.

Made of marble by the sculptor Sinan İlhan and completed in six months, the 800 kilogram replica was placed in its final resting spot with a lever.

The chair with the mythological gryphon symbol with the head and wings of an eagle and with the body of panther will be hosting visitors at the metropolis antique city.

'The chair has extraordinary features'

Head of the Metropolis Excavation Committee Dr. Serdar Aybek stated in his speech at the ceremony that the gryphon noble chair plays an important role in the recognition of the historical area at a national and an international level.

Stating that the ancient city was composed of two floors, Aybek noted that the area seemed like a field before and added, "We were very surprised when the chair was found in 1995. It was not like the chairs we knew. It had extraordinary features. It looked like it was made by a sculptor. After the soils were cleaned, we realized that we had one very rare work of art. We transferred it to the museum. When our visitors say that they want to see original works, we applied to the Sabancı Foundation and we wanted to create and establish the artwork of our own era. I hope this replica can stand at this site for another 2,000 years."

'Land where women are glorified'

"Lands where women are glorified have a special place for us. It sheds light on history. Its history dates back to 2,500 years ago. We are proud to be a part of this," said Safkan.

She further noted that more than 11,000 works to this day were found at the ancient city and the gryphon noble chair, which became a symbol of the city and stands out from other works. She added that they have replaced a 2,000 year old chair with a new technique and reproduction. Sculptor Sinan İlhan also gave information about the carving technique of the period.