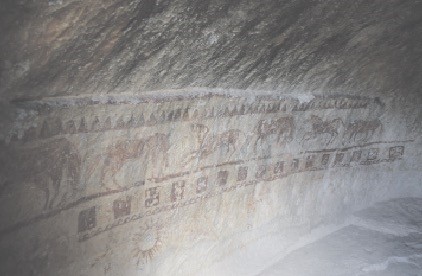 The 2,800-year-old rock-cut tombs and the hieroglyphs found on the walls of one of these tombs in the Onar neighborhood, one of the important tourism centers of Malatya's Arapgir district, are attracting a great number of visitors. The number of people who visited the site to see a total of 21 rock-cut tombs that belong to the Eastern Roman Empire period reached 5,000 in 10 months.

Onar's volunteer guide Serdan Kaygusuz explained that among the rock tombs open for visitors, one cave with hieroglyphs on the wall is especially the center of attention, noting that about 5,000 people visited the rock-cut tombs in 10 months. "The rock-cut tombs belong to the Romans. The legionaries residing in the fields above the caves, moved from here to the Arab countries.

Coins and swords were found in the Roman general's rock-cut tomb with various figures such as horses and the sun on the walls," Kaygusuz said. "About 6,000 to 7,000 Romans, who settled in the upper part of the caves, buried their dead in these caves. The caves generally retained their originality and did not suffer much damage [from time]."